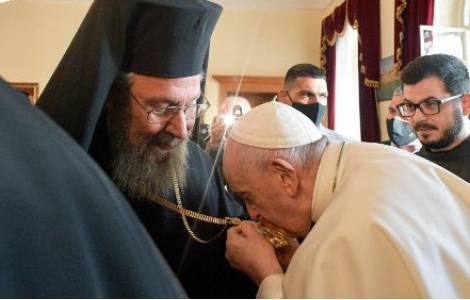 Nicosia (Agenzia Fides) - The path towards the full visible unity of Christians is not only of interest to theologians and "experts" in ecumenism. It has to do with the mission of salvation entrusted by Christ to his Church and with the testimony of Christ which can flourish in the lives of all the baptized. Pope Francis recalled this in his speech on the morning of Friday, December 3 in the Orthodox Cathedral in Nicosia, during one of the highlights of his visit to the Mediterranean island. After listening to the address addressed of the Orthodox Patriarch Chrysostomos II, the Bishop of Rome indicated the common apostolic witness as the goal and horizon of every sincere ecumenical effort. He did it once again, drawing inspiration from the events of Saint Paul and Saint Barnabas, originally from Cyprus and patron of the island, recounted in the Acts of the Apostles and linked to the great adventure of the first apostolic preaching of the Christian announcement.
Barnabas - remarked Pope Francis - «exhorts us, his brothers, to undertake the same mission of bringing the Gospel to men».
We document here the address of Pope Francis with the members of the Holy Synod: