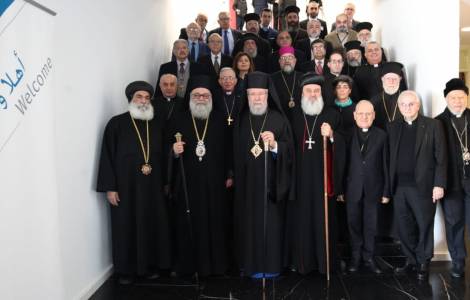 Larnaca (Agenzia Fides) - In the conflicts that damage the Middle East, Christians in that region can experience "the mystery of God's love", his compassion and his love for every human being even in the midst of many difficult circumstances. This is underlined in the statement released by the Executive Committee of the MECC Middle East Council of Churches, gathered on Tuesday 21 and Wednesday 22 January in Larnaca (Cyprus), for two days of coexistence and common work lived in the context of the Week of prayer for Christian unity. The meeting, hosted by Chrysostomos II, Greek Orthodox Archbishop of Cyprus, also included Yohanna X, Greek Orthodox Patriarch of Antioch, Ignatios Aphrem II, Syrian Orthodox Patriarch of Antioch", and among others also Cardinal Louis Raphael Sako, Patriarch of Babylon of the Chaldeans.
In the joint document released at the end of the work, the participants in the MECC Executive Committee ask to preserve the faith and hope of many Christians in the Middle East, an area still afflicted by "bloody events". At the same time, it is underlined that the sufferings are not suffered only by Churches and by Christians, but affect entire peoples of the region. The document recalls all the church realities involved in the ecumenical organism to intensify its presence "alongside every suffering, displaced person and migrant, who has lost loved ones or possessions because of violence and wars, so that Churches remain an icon of God's tenderness and closeness".
In addition to sharing reflections, concerns and suggestions on the condition of peoples and churches in different countries, the committee members also listened to the report of Professor Souraya Bechealany, Secretary General of the MECC, concerning the work done in the past year and the prospects and future initiatives of the ecumenical body. The participants of the meeting also asked in common prayer to know the fate of Boulos Yazigi and Mar Gregorios Yohanna Ibrahim, the two Archbishops of Aleppo - the first Greek Orthodox, the second Syrian Orthodox – who disappeared on April 22, 2013 in Syria. Then, focusing on situations and events concerning individual countries, the participants in the meeting stressed the instances of social justice and the fight against corruption that are characterizing the protests taking place in Iraq. With regard to Syria, the MECC Executive Committee underlined the urgency of involving all local and international components in the process aimed at restoring peace throughout the territory and promoting the return of internally displaced persons and refugees to their homes. Explicit support was also expressed towards the mobilizations of the Lebanese people who express impatience towards corruption and non-fullfilment by the national political class. Regarding Cyprus, which hosted the ecumenical summit, the members of the Executive Committee of the MECC explicitly asked for an end to the occupation that led to the division of the island, while regarding the situation in Palestine they expressed support to those who suffer "the consequences of the occupation, apartheid policy" and the indiscriminate expansion of illegal settlements on Palestinian territory, while demanding respect for the freedom of following the rites and practices related to one's faith for all Palestinians, Christians and Muslims, also in East Jerusalem, defined in the document as "the capital of an independent Palestinian state". The final MECC release also expresses support for the Egyptian people committed to free themselves from violence and extremism and to consolidate the principle of citizenship as an essential factor in civilian life. "Inviting the peoples of the region to make the principle of citizenship prevail, together with rights and duties" reads the press release "requires a review of the systems and laws" that helps to combine national unity and recognition of diversity, and free civil life from any sectarianism.
The Middle East Council of Churches, founded in 1974 in Nicosia and currently based in Beirut, has the aim of facilitating the convergence of Middle Eastern Christian communities on issues of common interest and favoring the overcoming of confessional contrasts.
Professor Souraya Bechealany, a Maronite Christian, teaches theology at the Université Saint-Joseph de Beyrouth. Souraya was elected Secretary General of the MECC in January 2018, and together with her collaborators she undertook a process of restructuring the departments of the human body. (GV) (Agenzia Fides, 23/1/2020)