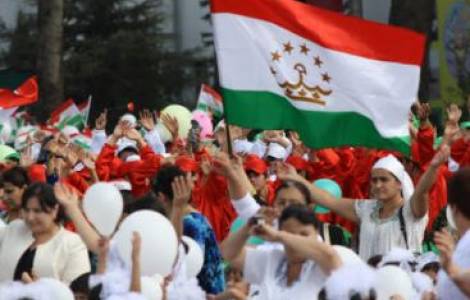 2021-01-21
Job loss as a result of the coronavirus pandemic: Caritas helps returnees

Dushanbe (Agenzia Fides) - "Following the Tajik presidential elections on 11 October, President Emomali Rahmon was elected for the sixth time with more than 90% of the votes, which means that in this Central Asian country power has been in the hands of the same person for 28 years and that, if he were to end his mandate, this period would increase to 35 years". This is what Davide Cancarini, a researcher for the international geopolitical journal "Limes", and a Central Asian scholar, reports to Agenzia Fides, referring to the socio-political context that characterized the last presidential elections in Tajikistan.
"The president of Tajikistan - observes the researcher - had perhaps toyed with the idea of inaugurating a dynastic succession in 2020. Four years ago, in fact, the government had approved a constitutional reform which lowered the minimum age of presidential candidates from 35 to 30 years. This operation seemed made ad hoc for one of Rahmon's sons, Rustam Emomali, now 32 years old, protagonist of a brilliant political career. He is currently Mayor of the capital and Speaker of Parliament. From this perspective, the 2020 presidential elections could have marked a passing of the baton from father to son. But this was not the case. Some argue that disagreements in the Rahmon clan had blocked the initiative; others believe that it was even Russia that oppossed this succession. The Tajik president considered the moment unsuitable, because it would have been risky to put a 32-year-old in power at a time of crisis and such great economic uncertainty".
Thanks to his umpteenth electoral victory, Emomali Rahmon has become the longest-serving President of the former Soviet Union: "This exorbitant figure is the result of a long work in the nineties. Rahmon's power was not so strong, but over the years he was able to remove all forms of opposition and outlaw parties that he believed should not operate in the country", explains Cancarini.
According to the researcher, "to date, Tajikistan is, along with Turkmenistan, the most authoritarian country in Central Asia. This is why no one would think of taking to the streets to demonstrate against the government as was the case in neighboring Kyrgyzstan".
The authoritarian characteristic of the political situation is confirmed by the data collected by NGOs on social life and in particular by the latest report on press freedom last April from the NGO Reporters Without Borders. Out of a total of 180 countries in the world taken into consideration in this framework, Tajikistan is in 161st place and it is also very poorly classified in the framework of the classification of perceived corruption established by the NGO "Transparency International", occupying the 153rd place. The worsening of the repression of civil and political rights by the Tajik government constitutes, according to NGOs such as "Human Rights Watch" and "Amnesty international", a continual general degradation of respect for human rights, which was also highlighted in the process of approaching presidential elections.
Lights and shadows characterize the theme of religious freedom. The Constitution of Tajikistan, approved in 1994 and revised in 2003, recognizes the right to freedom of conscience, giving each citizen the right to independently determine his relationship with religion and to profess any creed, individually or in community. However, the "law on religion", which entered into force in 2009, has limitations, including, for example, the obligation to register groups of the faithful and the prohibition of private religious education. In this context, the Catholic Church in the country constitutes a small community within a 98% Muslim social context. The faithful are currently about one hundred, distributed between the two parishes of Dushambe and Qurǧonteppa. The Catholic presence in Tajikistan has exsisted since the 1970s: the first faithful were mostly Germans from Russia, Ukraine and Lithuania, deported to the country at the time of the Soviet Union. Due to the Communist regime, the communities of Tajikistan were completely isolated from the universal Church for years. Pope John Paul II structured the local Catholic presence, establishing the Missio sui iuris on 29 September 1997. (LF-PA) (Agenzia Fides, 28/10/2020)

AMERICA/HONDURAS - The Bishop of La Ceiba on the Zedes: "let's defend the common good, let's defend territorial sovereignty and our values"

AFRICA/D.R. CONGO - Let us strengthen national unity by fighting against the negative values that threaten it", exhort the Bishops

AMERICA/MEXICO - The Bishops: "Today more than ever, our societies need peacemakers"

ASIA/INDIA - In the midst of the pandemic, violence against Christians does not stop

freedom of the press