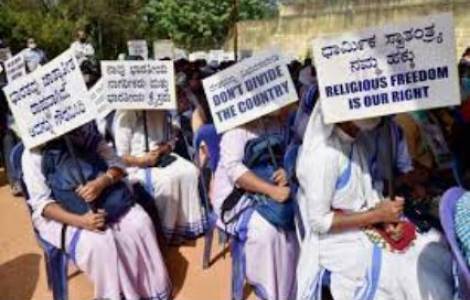 Bangalore (Agenzia Fides) - The recent bill that seeks to regulate religious conversions in the Indian state of Karnataka - a state in Southwestern India with more than 64 million inhabitants - goes against the Constitution, violates human dignity, freedom of conscience and religious freedom: this is what Father Irudhaya Jothi, a Jesuit committed to works and social services in the State, declared to Agenzia Fides. The legislation that the Upper House of the State of Karnataka (the "Karnataka Legislative Council", in the bicameral system) has definitively approved - after the approval of the Lower House in December 2021 - "is a draconian law is unjustified", observes the religious. "Its objective is to scare Christians and members of other communities, to strengthen support for Hindu nationalist parties", he argues. The current provisions of the bill "can be misused to discourage poor and oppressed communities, especially Dalits (untouchable and marginalized groups) and tribal communities, from education, employment and social assistance programs," observes the Jesuit.
Father Devasagayaraj M. Zacharias, former secretary of the Office for Dalits of the Bishops' Conference of India (CBCI), agrees: "The Constitution of India - he reminds Fides - enshrines the fundamental right of the person to profess, practice and propagate any conscientiously chosen religion. The enactment of the anti-conversion law is contrary to the Indian Constitution and must be challenged in court". "The procedure to convert from one faith to another - he points out - is so cumbersome and bureaucratic that it is almost impossible to complete the religious conversion". In particular, all Dalits who wish to convert to Christianity "will be hampered only by a political issue."
The “Karnataka Right to Freedom of Religion Bill” was passed by the Karantaka Lower House on December 23, 2021, but was not presented to the Upper House because the “Bharatiya Janata Party” (BJP), the Hindu nationalist formation that promoted it, did not have a majority in that assembly at the time. In 2022, thanks to some administrative votes, the BJP also obtained a majority in the Upper House, with 41 members out of 75. On September 15, the bill was introduced by the BJP and approved.
"The Supreme Court has affirmed that freedom of religion does not allow forced conversions. There is freedom of conversion, but not under duress or seduction", said Karantaka's Interior Minister, Araga Jnanendra, when presenting the bill on September 15 and justifying the legislation.
"Religious conversion must be regulated: this is the intention behind the bill. We do not want to deprive anyone of a right, nor violate Article 25 of the Constitution [which guarantees the right to practice and propagate religion, ed.]", stated the Prime Minister of Karnataka, Basavaraj Bommai, explaining the purpose of the law: "We want to maintain law and order and prevent religious conflicts".
Catholic writer and journalist John Dayal comments to Fides: "This is not the way to prevent conflicts. In fact, the law violates the rule of law and religious freedom. Let us remember that India is a democratic republic that has always sanctioned and protected the fundamental rights of the people, including the freedom to profess, practice and propagate one's religion."
According to the bill, "no one can convert or attempt to convert, directly or indirectly, another person from one religion to another by false statement, force, undue influence, duress, seduction, or any fraudulent means, including through marriage; no one will encourage or organize religious conversions of other people".
In case of violation, a prison sentence of three to five years and a fine of 25,000 Indian rupees (307 dollars) is foreseen, while the prison sentence is raised to 10 years and the fine of 50,000 rupees (614 dollars) for those who convert minors, women and people from the "Scheduled Castes and Scheduled Tribes" communities, considered marginalized and vulnerable groups.
According to the established procedure, if a person intends to change his faith, the minister of worship must notify the magistrate, who will announce it publicly on a notice board, pending the objections that, where appropriate, will be examined.
Subsequently, if no doubts have arisen, the interested party will be summoned by the magistrate to verify his identity and confirm the content of the statement. In addition, family members, relatives or friends of a person who claims to have changed their beliefs can file a “complaint for forced conversion” in court.
The practice of proposing regulations that regulate or restrict religious conversion has taken hold for some years in the Indian Federation, thanks to the nationalist Bharatiya Janata Party. Several states in northern, western and eastern India such as Uttar Pradesh, Himachal Pradesh, Gujarat, Chhattisgarh, Odisha, Madhya Pradesh, Arunachal Pradesh, Uttarakhand and Jharkhand have passed laws restricting religious conversions. Karnataka, in southern India, has been the latest to enact such a law. Indian Christians have always opposed these measures, and in some cases have filed legal challenges. (PA/SD) (Agenzia Fides, 5/10/2022)

ASIA/PAKISTAN - Forced religious conversion: may the government accept the appeal submitted to the UN

ASIA/PAKISTAN - "Conversion without consent": a plague for Pakistani society