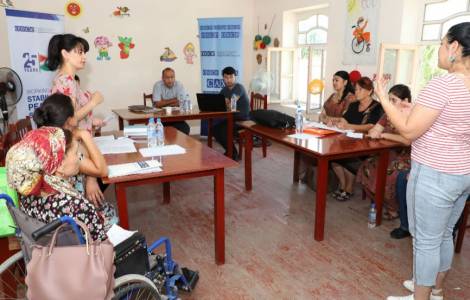 2022-07-30
Integration of people with disabilities and environmental sustainability: the work of human promotion of the Church

2021-01-21
Job loss as a result of the coronavirus pandemic: Caritas helps returnees

Dushanbe (Agenzia Fides) - Social integration of people with disabilities and environmental sustainability. This is the commitment of the Church of Tajikistan which is working on these two fronts: as we learn from a note sent to Fides by the local Church, an important contribution is made by local Catholics as part of a project aimed at promoting access to zero-rate microcredits for people with physical disabilities. "With the help of Caritas - reads the note - we have been supporting the initiative since 2016 because, in this country, having access to loans and banking services is a big problem for people with disabilities. The concern of the banks is the risk of non-repayment by this category of customers".
During the annual meeting between the associations that adhere to the project, the good results achieved in the financing of agricultural projects, thanks to the purchase of high quality planting material, were highlighted: "This aspect - reads the note sent to Fides - allowed us to introduce the themes of the 'Together We' campaign, promoted by Caritas Internationalis, to make people understand how sustainable agriculture, inspired by the values of the encyclical Laudato Sì, can also represent an entrepreneurial opportunity.
It was emphasized that the use of organic fertilizers from animal and vegetable waste and eco-friendly methods of plant treatment represent an advantage for the environment and therefore increase the opportunities for work. Furthermore, in a historical period in which the cost of chemical fertilizers is rising, the use of organic ones is also a way to save money".
In addition, the press release reads, "we have also introduced the idea of recycling plastic as a cure for creation and at the same time as an opportunity for profit. In fact, with minimal means, it is possible to reuse some very common plastics, such as PET, for the production of different types of goods, such as brushes, baskets, decorative elements, and then sell them in the local market".
The "culture of recycling" and environmental protection are still little felt in the Central Asian country: there are, for example, people involved in metal collection operations but, due to the high transport costs, collecting and dividing plastic , paper and other recyclable materials is considered an inexpensive practice.
The commitment of Caritas and of the entire Catholic community in Tajikistan in this sector, therefore, generates in the local authorities and in the civil population a general esteem and appreciation for the Catholic Church as a whole, also because a fruitful partnership has been established with the civil institutions.
The Catholic presence in Tajikistan began in 1970. The first faithful were mostly Germans from Russia, Ukraine and Lithuania, deported to the country at the time of the Soviet Union. Due to the restrictions on religious freedom imposed by the communist regime, these first communities lived in a situation of isolation from the universal Church, until the institution of the Missio sui iuris, which took place on September 29, 1997. The charitable actions, however, initiated in 1983 by small groups, which officially merged into Caritas starting from 2004. Since then, the organization has consolidated projects aimed at social support for the most disadvantaged. (LF/PA) (Agenzia Fides, 30/7/2022)