AMERICA/COLOMBIA - The relics of Father Ramírez transfered, the Martyr of Armero, the next blessed 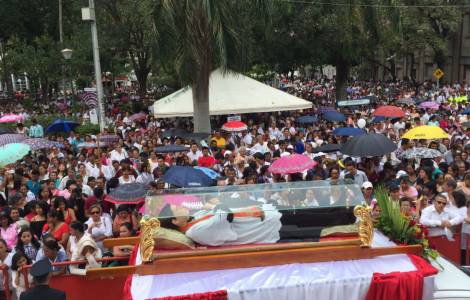 San Sebastian de La Plata (Agenzia Fides) - A long and crowded procession accompanied the transfer of the relics of Fr. Pedro María Ramírez Ramos, known as "Martyr of Armero", from the main cemetery to the church of San Sebastián de La Plata, department of Huila, in view of the next beatification, which will be presided over by Pope Francis during his pastoral visit to Colombia on 8 September in Villavicencio. The long procession was led by the Archbishop of Ibagué, Mgr. Flavio Calle Zapata, and by other Bishops. Pope Francis will also beatify Bishop Jesús Emilio Jaramillo, another Colombian martyr (see Fides 7/7/2017).
Pedro María Ramírez Ramos was born on 23 October 1899 in La Plata, Huila, and was baptized the following day. Fourth of seven children, he had other brothers born from his father's first marriage, who died when he was 10 years old. After primary school education, he entered La Mesa de Elías minor Seminary at twelve years of age and then went to the Major Seminary in Garzon in 1915, where he studied philosophy and theology.
In the following years he worked as a director and secretary of the parish chorus, and he dedicated his time to teaching, without neglecting parish life. He was ordained a priest on June 21, 1931. He carried out his pastoral ministry as deputy parish priest and parish priest in four parishes: the last one was in Armero, where he arrived in 1946 and where he suffered martyrdom.
On April 9, 1948, liberal candidate Pedro Eliecer Gaitán was killed in Bogotà and this fact unleashed a wave of terrifying violence in which Liberals and Conservatives faced each other. Father Pedro Maria was targeted as he was considered close to the conservative environment. On the afternoon of April 10, 1948, a large group of Liberals desecrated the church and convent of the Sisters, and arrested Father Pedro Maria, who had refused to flee the country. The mob took Fr. Ramirez and beat him with sticks and their fists before bashing his head with a machete. His body remained in the square until midnight, when he was then dragged at the entrance of the cemetery and thrown in a pit. His body was later recovered and preserved from further desecration and was brought to the graveyard of La Plata, his birthplace, which then became a pilgrimage destination. (SL) (Agenzia Fides, 29/8/2017)