EUROPE/ITALY - An impulse for mission and for vocations comes from the beatification of Sr. Leonella 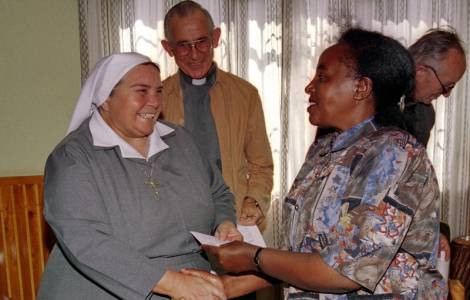 Rome (Agenzia Fides) - "From the beatification of Sister Leonella we expect great strength for mission and for vocations, because looking at her young people in the whole world can wonder about the possibility of giving their lives for the Lord Jesus". Sister Renata Conti, Missionary of the Consolata, postulator of the cause of beatification of her sister, Sister Leonella Sgorbati, speaks to Agenzia Fides on the eve of her beatification, which will be celebrated next Saturday, May 26, in the Cathedral of Piacenza, her birthplace.
Sister Leonella, an Italian missionary, died in Mogadishu (Somalia), on September 17, 2006, gunned down while she was going to the hospital where she served. Even Mohamed Mahamud, the guard who had tried to rescue her died, too (see Fides 18/9/2006, 20/9/2006, 25/9/2006, 27/9/2006, 10/11/2017).
"As an institute and as a community - continues Sister Renata - we live this moment with so much joy and so much commitment, because the figure and the martyrdom of Sister Leonella are a strong reference to our charism: we are called to live for the mission to the point of giving our life, this is what is written in our constitutions and this was recommended by our founder, Blessed Joseph Allamano. Martyrdom is therefore a reference to the whole institute. Our superior general, mother Simona Brambilla, in her letter stresses that we must look up to Sister Leonella as a charismatic model, a model that stimulates us to be what we must be".
In the communities of the Consolata Missionaries spread over four continents, this time of preparation has been lived with different local initiatives, which will culminate on the day of the beatification, when in communion with the celebration of Piacenza, a solemn Eucharist will be celebrated in all parts of the world where the Consolata Missionaries are present.
Sister Leonella gave her life as a missionary in Africa, where she was sent in 1970 and remained until her death on September 17, 2006, here her memory is still particularly vivid. The Bishops of the Latin Episcopal Conference of the Arab Regions (CELRA), at the end of their Ad Limina visit, last March, wrote in the final statement: "Among the good news, we learned that among the many martyrs who died for the faith in our respective dioceses, Sr. Leonella Sgorbati, consolata missionary, martyred in Mogadishu in 2006, will be beatified on May 26, 2018 in Piacenza. Thinking of the life of this sister and thousands of martyrs for the faith, we recall that their blood is a source of encouragement and hope in our commitment to the poor. We greet the religious congregations, priests and the faithful who work in dramatic situations with respect and affection... ".
A large delegation from Kenya will be present at the beatification ceremony, which will be presided over by Cardinal Angelo Amato, Prefect of the Congregation for the Causes of Saints, explains Sister Renata: the Archbishop of Nairobi, John Njue, the Archbishop of Nyeri Bishop of Meru, in addition to a group of representatives of the local ecclesial community, diocesan priests, religious, his former students ... "Other Bishops will be present - continues Sr. Renata - Mgr. Giorgio Bertin, Bishop of Djibuti and Apostolic Administrator of Mogadishu, who knew her well, naturally the Bishop of Piacenza, her hometown, and the Archbishop of Milan, since Sister Leonella also lived in Sesto San Giovanni. A solemn mass of thanksgiving for the beatification has already been scheduled for June 18, at the Consolata Sanctuary in Kenya, which is expected to be attended by many people, because Sister Leonella was very well known and loved".
Among the most significant moments of the celebration of beatification, Sister Renata recalls that "our African novices, together with the seminarians of the African Consolata Missionaries, will perform a typical offertory dance of the African liturgy, bringing the palm tree, sign of martyrdom". Moreover, together with her relic, which will be brought by the superior general after the beatification decree, the superior of the community that was present at that time, will bring the two diaries written by Sister Leonella. "The last sentence is dated 12 September 2006, and is incomplete: 'I hope the Lord will help me ...'. We would like to publish them because they bear witness to a strong journey of donation in full union with Eucharist Jesus", concludes Sr. Renata. (SL) (Agenzia Fides, 22/05/2018)