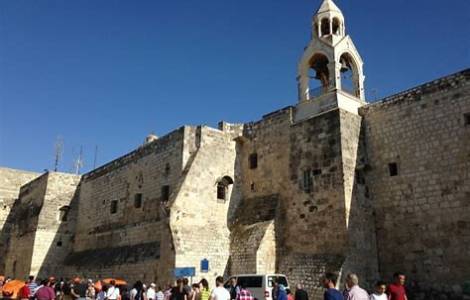 Bethlehem (Agenzia Fides) - The increase of pilgrims and tourists to Bethlehem continues, the Palestinian city where Jesus was born, and also for this reason the Presidential Committee of Churches Affairs in Palestine announced on Monday 11 November that it has decided to extend the opening hours of the holy site by an extra 3 hours, from 5 am until 8 pm, in preparation for Advent and Christmas. Ramzy Khoury, President of the Committee, pointed out that these efforts are being carried out in response to the increase in the numbers of pilgrims and tourists, both locally and those coming from far afield, visiting Bethlehem and the Church of Nativity. This increase in numbers, especially to the Church of Nativity, has resulted in long queues of people who have to wait from 45 minutes to 2 hours to get a glimpse of the Grotto, where according to tradition baby Jesus was born. To add to that, the church has been undergoing restoration since 2012. Restoration works are still expected to continue until next year.
Bethlehem and East Jerusalem governorates "are the main holy destinations for tourists coming to Palestine" reads a press release by the Palestinian Central Bureau of Statistics and the Ministry of Tourism and Antiquities, published on World Tourism Day last September.
In the first half of 2019, tourist and Holy Sites in the West Bank had received 1,726,560 visits, an increase of 17% compared to the same period of 2018. The statistical data confirm Bethlehem as a favorite destination for pilgrims, especially during Advent and the time of Christmas.
The constant increase of pilgrims and tourists to the Holy Land, recorded in recent years, represents a very important objective data, especially if one takes into account the social, sectarian and geopolitical conflicts that continue to torment the Middle Eastern area . (GV) (Agenzia Fides, 13/11/2019)