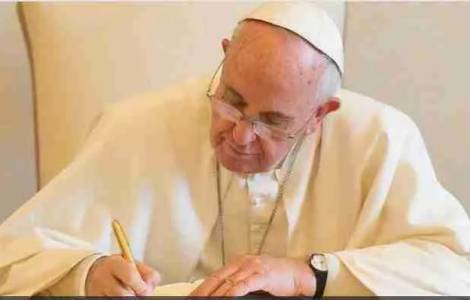 by Gianni Valente
Rome (Agenzia Fides) - It could have been a "Papal Exhortation" like the others. A series of useful and appropriate considerations and recommendations, offered by the Pope and inspired by the work carried out by the 2012 Assembly of the Synod of Bishops, dedicated to the "new evangelization for the transmission of the Christian faith". Pope Francis wanted to make it a key document for the ecclesial season we are living. Almost a "road map" to suggest the "paths for the Church’s journey in years to come" (§1).
With the Apostolic Exhortation Evangelii Gaudium, signed on November 24, 2013, Pope Francis wanted to "present some guidelines which can encourage and guide the whole Church in a new phase of evangelization, one marked by enthusiasm and vitality" (§17). Thus the Church's inexhaustible missionary urgency of the Church was projected with new accents on this ecclesial time, with a singular, operative and sometimes impetuous magisterial text in its reaffirmation that the proclamation of the Gospel is the Church's raison d'être.

When Evangelii Gaudium was published a new beginning was felt. In this document, the Bishop of Rome, who came from Buenos Aires, also reiterated that the mission of experiencing and proposing to others the salvation promised in the Gospel is not a self-produced action, it is not triggered by virtue of one's own intentions, reasoning or efforts of will. The Successor of Peter reiterated that proclaiming and bearing witness to the Gospel of Christ can never be understood as "a heroic individual undertaking, for it is first and foremost the Lord’s work (...). Jesus is "the first and the greatest evangelizer". In every activity of evangelization, the primacy always belongs to God" (§12).
The Pope also reminded that the ecclesial structure can free itself from the narrow circle of its own self-referentiality but not through a programmatic effort, but only if it runs after the attraction of Christ, which can lead it to a "pastoral and missionary conversion" of all ecclesial dynamics, to “facilitate”, to make the encounter with Christ easier for those who have never met him.
Almost a decade later, much of the media (including those "specialized" in ecclesiastical matters) continues to portray the image of a Church in a certain way, even more closed in on itself. Today more than then, all caught up in settling its internal issues, its redistributions of power, victim of constant self-promotion.
The current scenario can help adjust the emphatic tones and celebratory rhetoric. Evangelii Gaudium does not deserve to be sublimated and discarded with the false altarpieces and the words in the wind of some parade commemoration. Neither does it deserve to be “relaunched” by presenting it as a kind of “Party line” that must be reaffirmed and imposed by force on the entire “apparatus”. It is precisely the present time of the Church, with its open questions and the burden of its burdens, which paradoxically can make the living parts of that text emerge with greater relief. Passages and reflections that today, ten years later, are even more current.
Today, perhaps more than then, it is evident that the mission of proclaiming the Gospel is not and cannot be the work of elitist media-controlled circles, and that the joy of the Gospel is witnessed by all the holy people of God, "holy thanks to this anointing, which makes it infallible 'in credendo'" (Evangelii Gaudium, 119), even where this people is a small remnant or is dispersed in the immense diaspora of globalization.
Today, perhaps more than ten years ago, it is clear that "anyone who has truly experienced God’s saving love does not need much time or lengthy training to go out and proclaim that love" (Evangelii Gaudium, 120).
Today, those who by grace live and bear witness to Christian hope in the midst of the frailties, senselessness and confusions of the present time can perhaps recognize more easily than ten years ago that "a small step, in the midst of great human limitations, can be more pleasing to God than a life which appears outwardly in order but moves through the day without confronting great difficulties". (Evangelii Gaudium, 44).
In the same way, the present time of the Church can be a propitious moment to reweave the threads. Now that the Pontiff has inaugurated a new cycle of Wednesday catecheses, dedicated to the "passion for evangelization, that is, apostolic zeal" (see Fides, 11 and 18/1/2023).
This is also why, from now until November, with widely spaced intervals, Fides will publish a series of articles aimed at re-proposing the contents and crucial passages of Evangelii Gaudium.
Fides will retrace the most vivid passages of Evangelii Gaudium not with the pretense of closing the circle, "setting things right", but for the simple sake (and the tacit hope) of being displaced in recognizing - as always happens to those who find themselves living an authentic apostolic and missionary adventure to the fullest - that "there is no greater freedom than that of allowing oneself to be guided by the Holy Spirit, renouncing the attempt to plan and control everything to the last detail, and instead letting him enlighten, guide and direct us, leading us wherever he wills" (Evangelii Gaudium, 280). (Agenzia Fides, 24/1/2023)

VATICAN - Funeral of Benedict XVI: "we too have come with the fragrance of gratitude and the balm of hope"

AMERICA/CHILE - Pope Francis to Chilean Bishops: clericalism is the "enemy" of the mission