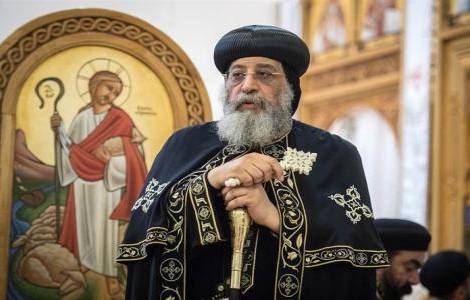 2020-12-30
The number of churches and ecclesiastical buildings "regularized" by the Egyptian government bringing their total to 1,800

2020-12-04
Patriarch Tawadros II in a television interview: I suffer when I see the Church treated with neglect

2020-11-28
Egyptian Grand Mufti: political Islam has become "a nightmare" for Muslims and the whole world

Cairo (Agenzia Fides) - It is certainly not social networks and social media that open the gates of Paradise to the men and women of today. This was underlined by Pope Tawadros II, Patriarch of the Coptic Orthodox Church in a speech to the members of the Rotary Club of Alexandria-Pharos based on a famous quote from St. Filippo Neri. In his speech, Pope Tawadros added that social media is a "double-edged sword", like a "knife" that can be used correctly or incorrectly, with a destructive potential capable of harming individuals and lacerating the social fabric. "Everyone receives a gift from God 24 hours a day", said the Patriarch and if you spend most of your life in social networks, as happens to so many young people, you end up wrecking this treasure. In our time - Pope Tawadros acknowledged - "every person cannot help but use modern technological devices in their daily life. But this use must be done wisely and without excesses".
The Coptic Orthodox Church has for some time questioned the impact caused by the spread of social networks and social media on the concrete life of church communities. In recent months, there have been numerous cases of false social profiles, attempting to promote abusive fundraising campaigns or sexual abuse on behalf of monks and nuns of Coptic monasteries. Such a profile was created, for example, for non-existent "Sister Aghaby" of the monastery of St. Demiana in the desert, and to an equally fictional monk Samayel, who accredited himself to his followers using in particular the stolen photograph of a real monk of the Monastery of Saint Thomas the Hermit.
In order to prevent such abuse within the Coptic religious orders, the committee for the monasteries of the Holy Coptic Orthodox Synod laid down 12 rules, which were ratified by Patriarch Tawadros II and which apply to all members of the monastic communities of the Coptic Orthodox Church.
Among other things, the Coptic monks and nuns were asked to close their personal accounts and all blogs on social media, which are critically viewed as instruments used primarily to disseminate "confusing ideas" and fuel personalism.
More than two years ago (see Fides, 25/10/2018) also the Chaldean Patriarchate, in a message disseminated through its official channels, wanted to express a "word of reassurance" for believers and readers, in the face of the rampant phenomenon of interventions and misleading manipulative texts published online on issues relating to the life of the Church and Christian communities".
In April 2018, the Maronite Church had also released the document entitled "The Truth that Liberates and Unites", which was presented as a real doctrinal and pastoral handbook, aimed at offering criteria and points of reference that must inspire and guide media interventions and debates focused on issues and themes concerning the Catholic faith and the Magisterium of the Church. These criteria are necessary, it says in the introduction, after disputes over doctrinal issues had also been conducted via social media in the previous months and in some cases had assumed inappropriate forms and tones, which were incompatible with the proposed criteria from ecclesial communion, and risked spreading doubts and confusion among the faithful. (GV) (Agenzia Fides, 16/11/2020)

AMERICA/CHILE - Pope Francis to Chilean Bishops: clericalism is the "enemy" of the mission

ASIA/PHILIPPINES - The love of the Child Jesus, source of love for the poor in times of pandemic