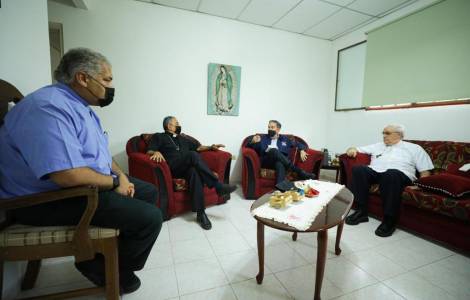 2022-09-19
The Bishops announce the second phase of the dialogue, a new step in the fight against inequality, social exclusion and corruption

2022-07-30
Dialogue continues, tension has decreased, the Church does not exclude anyone

2022-07-11
Bishops’ appeal: "All committed to strengthening the unity and stability of the family, so that it can fulfill its mission"

Panama (Agenzia Fides) - "The first fruits of the Single Dialogue Table are taking shape and the climate of tension has considerably decreased in the country", say the Bishops of Panama, who have accepted to be facilitators, responding to some currents of opinion that insist in affirming that "the Catholic Church has excluded some productive sectors of the country from Dialogue". The Bishops therefore published a statement, sent to Fides, in which they clarify the situation.
First of all, it is reiterated that "the Executive asked the Catholic Church to deal with dialogue as a tool to reduce the scenarios of violence that were spreading in the country" (see Fides, 14/7/2022). Since July 15, the team of facilitators of the Catholic Church (Cardinal José Luis Lacunza, Bishop of David; Monsignor José Domingo Ulloa Mendieta, Archbishop of Panama; Monsignor Rafael Valdivieso Miranda, President of the Panamanian Episcopal Conference and Bishop of Chitré; and Monsignor Edgardo Cedeño, Bishop of Penonomé) had contacts with those groups identified by the Executive as interlocutors, in separate tables.
"The Catholic Church - it is written in the statement addressed to Catholics and to all men of good will - has accepted to be a facilitator of dialogue and has proposed to do so on the basis of the principles expressed in Statement n. 2, of July 16, 2022, which were accepted by the executive power and by the protagonists, who expressed their discontent in the streets, which are: a) Dialogue at a single table. b) To agree on a single agenda among all actors. c) To establish a process divided into phases, first the urgent one, to overcome the current situation and, then, a deeper dialogue in which the transformation path of the country is traced, and which makes it a more just and equitable Panama. d) The actors of the first phase should be the groups that have expressed their discomfort and discontent through actions in the streets and highways of the Country and, in the second phase, the actors would be the representatives of all sectors of society".
The statement then reminds us that the preparatory meeting of the Single Dialogue Table began on Tuesday, July 19, 2022, after the groups of the separate tables accepted the facilitation offered by the Catholic Church, and chose the province of Coclé as their neutral seat. The alliances and groups that were already interlocutors of the Executive were present at the preparatory meeting: the Alianza Pueblo Unido por la Vida, the Alianza Nacional del Pueblo Organizado (ANADEPO), the leaders of the groups of the Comarca Ngnöbe-Buglé and of the peasant communities of the Oriente Chiricano.
On Thursday, July 21, 2022, the Single Dialogue Table for Panama began its first phase, "accepted by the Alliances and the Executive, with the main purpose of creating a favorable climate of calm that facilitates a deeper and broader social dialogue, with the participation in a second phase, of all those who have relevance in Panama".
The press release concludes by referring to the message of July 19, addressed to Private Companies, Merchants, Producers and the various Actors of Society, "in which the Catholic Church stresses that it has not excluded any sector or subject from the Single Table".
In the first days of July, Panama was paralyzed for a long time due to a strike which, started by the teachers, then spread to all other sectors of society, including students and indigenous people. The reason for the protest, which also saw fierce clashes with the police, was the exorbitant increase in the prices of basic necessities, including medicines, electricity and above all fuel. The increases set by the government were necessary to contain inflation. The Catholic Church, which had previously expressed concern about the social situation, responded to the appeal made by the Executive "to act as a bridge to find a solution - inclusive and participatory - to the situation that the country is experiencing", "accepting the invitation to be mediators in building the consent necessary for peaceful coexistence". (SL) (Agenzia Fides 30/7/2022)

ASIA/BANGLADESH - Awareness and prayer for the abolition of the death penalty, according to the intentions of the Pope