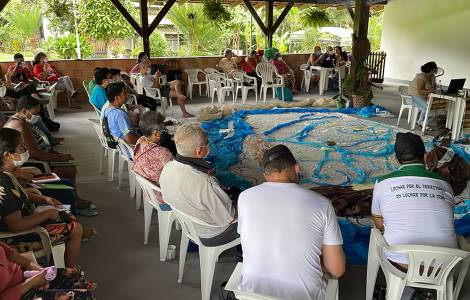 Manaus (Agenzia Fides) - The Pan-Amazonian Ecclesial Network (REPAM), through the section of Human Rights and International Advocacy, started the third edition of the School for the Promotion of Human Rights on July 4, in Manaus (Brazil), which will last until July 29. This project, explains the REPAM note sent to Fides, has as its main objective that of "providing educational tools that help formalize complaints about human rights violations that have occurred in the Amazonian territory". 24 leaders of indigenous peoples and traditional communities from Peru, Ecuador, Bolivia, Venezuela, Colombia and Brazil gathered for this occasion. The modules of the contents have been elaborated according to the specific needs of the territories: they are in fact the protagonists, that mark and build the paths of the School. Within the working methodology, in the first week, the groups had the opportunity to contextualize and share the reality of their territory and identify the main problems that aggravate the situation of inequality and crisis.
In Bolivia: the invasion of indigenous territories by large and small mining companies. In Ecuador, the reality of rivers after the spill of crude oil into the Coca River. In Colombia, deforestation in the Colombian Amazon and its influences on the well-being of communities. In Brazil, the struggles to maintain the traditional territories of Afro-descendants in Rondônia, to remain in the settlement of Jatobá, in Roraima, and the conflicts in the villages of Maraguap, Amazonas, were highlighted. In Peru they talked about the project of a waterway that will have an impact on the indigenous Kocama community and the struggle for the territory of the Puerto Novo community. In Venezuela, the dispute over territorial control, the threats of illegal mining and deforestation in indigenous territories was highlighted. Sexual exploitation and trafficking of children and adolescents was highlighted at the triple border of Peru, Colombia and Brazil.
This year's edition of the School counts the largest number of women, and for the first time a representative of the Afro-descendant communities stands out, who launched a message of resistance: "My parents were slaves, my family is a descendant of slaves. We live with more fear. We have gone through this too (murders). People have to resist, fight for their rights. Our fight is for everyone, for those who do not have any". This second week of the School is Human Rights Week, during which the main international instruments and methods for denouncing violated rights will be presented. (SL) (Agenzia Fides, 13/7/2022)