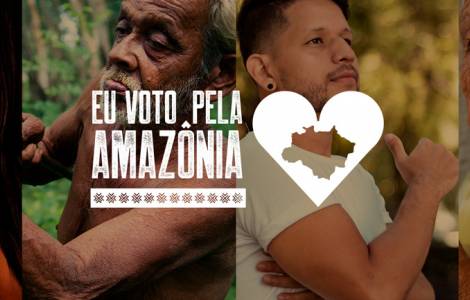 2022-06-23
The Bishops: "let's raise our voices again to denounce violence and cry out together for peace"

2022-06-10
IV Meeting in Santarém: "Continue sowing the Gospel and the signs of the Kingdom in our Beloved Amazon"

2022-06-09
The Catholic Church organizes “Week of Migrants”: The focus is on the topic of listening

Brasilia (Agenzia Fides) - The Ecclesial Pan-Amazonian Network (REPAM-Brazil), an organization of the National Bishops' Conference (CNBB), has launched the #EuVotoPelaAmazonia Campaign, with the aim of helping Christians and society to reflect on the importance to elect, in the general elections of October 2, politicians and governments committed to integral ecology, agroecology, socio-environmental justice, the well-being and rights of peoples and their territories.
The Campaign, which will run from May to September, will develop various awareness-raising actions such as debates on the Amazon and elections, reflections, videos, materials for social networks and traces of celebrations for communities in the Amazon and outside. There will also be a Eucharistic celebration on Amazon Day, September 5.
As the note released by the CNBB, sent to Fides, recalls, in recent years the Amazon biome has been violently attacked with fires, deforestation, invasion of indigenous lands and the advance of agribusiness and mining in the protected areas. While recognizing that other biomes are also under threat, the Amazon is essential in the fight against climate change and will therefore be at the center of the "Eu Voto Pela Amazonia" campaign. The Archbishop of Porto Velho and Secretary of REPAM, Monsignor Roque Paloschi, stressed that elections are a fundamental space for the exercise of citizenship and the moment when we can decide the direction of our history and the way to safeguard democracy. "For this reason, an integral education of all of us, the Brazilian people, is important. An education that helps to make conscious choices for the good of the community. We all know the fundamental importance of the Amazon biome and its socio-diversity for climatic balance and to guarantee the possibility of life for future generations", underlined the Archbishop. This vast territory is home to more than 180 indigenous peoples, as well as many isolated groups. "The Amazon is destroyed and devastated by economic interests, which cause an immeasurable exploitation of natural resources, extracting all the possibilities of life, all in the name of a technocratic development, as Laudato Sì tells us, endangering the life of all beings", added Archbishop Roque Paloschi. Repam-Brazil's Executive Director, Sr. Maria Irene Lopes, explained: "The idea is to make this campaign a strong moment of reflection and debate on the impact that the outcome of the elections can have, negatively or positively, on the Amazon and on all of us, since everything is interconnected". In the recent message published after their General Assembly (see Fides, 30/4/2022), the Brazilian bishops underlined that "the current picture is very serious. Brazil is not doing well!" denouncing, among other causes, the exploitation and degradation of the common home, the lack of respect for the rights of indigenous peoples, the persecution and criminalization of socio-environmental leaders, "the fragility of actions to combat crimes against environment and the disastrous parliamentary projects against the common house". The bishops therefore invited the whole of Brazilian society "to participate in the elections and to vote with conscience and responsibility", choosing the projects of the candidates committed to the integral defense of life, in all its stages, without forgetting human and social rights and our common home. (SL) (Agenzia Fides, 6/5/2022)

AMERICA/BRAZIL - "Let's take care of our Common Home!" theme of the first meeting of Indigenous Ecology

AMERICA/COLOMBIA - "A Church moving forward in the Amazon, overcoming fears and apprehensions": visit to the Vicariate of Puerto Leguízamo-Solano

AMERICA/BRAZIL - After half a century, the Santarém meeting continues to illuminate the path of evangelization in the Amazon

AMERICA/BRAZIL - Let's defend the Amazon from frontal attacks against indigenous peoples, the rainforest and water security