AMERICA/EL SALVADOR - CLAR on the new martyrs: "The commitment and defense of the poorest were their death sentence" 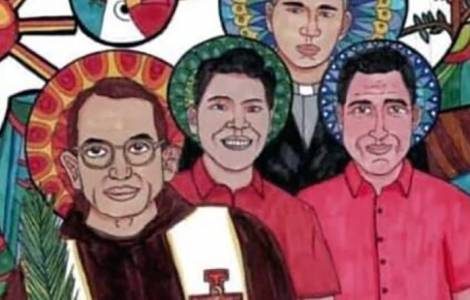 2022-01-27
Massacre of Jesuits: Film reconstructs what happened in 1989 and what is still happening today

2022-01-24
The four martyrs beatified: "May their heroic example arouse in everyone the desire to be courageous agents of fraternity and peace"

2022-01-22
CLAR on the new martyrs: "The commitment and defense of the poorest were their death sentence"

2022-01-22
Beatification of the four martyrs, the diocesan Postulator: "Our vocation is to follow the Lord"

2022-01-17
On January 22, the beatification of four martyrs: witnesses of an outgoing Church, which announces the Kingdom of God with words and deeds

2021-12-01
Water is a precious resource and a right: the Bishops ask to stop pollution and to ratify the reforms

San Salvador (Agenzia Fides) - "The religious life of the Continent, all the sisters and brothers scattered throughout the Kingdom, join in the ecclesial recognition of the martyrial witness of four of our brothers, who gave their lives for the humblest people, in a turbulent era in El Salvador. The commitment and defense of the poorest were their death sentence. Rutilo, Cosme, Manuel and Nelson lived through the tense and violent years before the civil war that affected the country for 12 years and left more than 80,000 dead. "The Latin American and Caribbean Confederation of Men and Women Religious (CLAR) expresses with these words its joy for the beatication of Father Rutilio Grande, Jesuit, of Italian Franciscan Fray Cosme Spessotto, OFM, and of the laity Manuel Solórzano and Nelson Rutilio Lemus Chávez, an event "expected since February 2020", which is celebrated today, at 5 pm, in San Salvador (see Fides, 1/9/2021; 17/1/2022).
The martyrdom of Fr. Rutile and fray Cosme "bequeaths us the obligation to verify and denounce the pain of the poorest and most vulnerable who suffer the scourge of misery and injustice. It obliges us to listen to the cry of the destruction of the common home and of the culture of a gap that mainly affects women, migrants and refugees, the elderly, indigenous peoples and Afro-descendants".
Furthermore, the statement sent to Fides continues, it also teaches us to face the consequences of the pandemic, "which increases social inequality, compromising the food security of a large part of our population", invites us to fight the causes that hinder synodality and to confront with our lack of prophecy and effective solidarity with the poorest and most vulnerable. Their martyrdom is also a sign of auspice and hope for religious Life, so that it may be a sign of the Kingdom of God, and "give witness to the good news of the Gospel".
"The inculturation of the Gospel is characterized by a decisive defense of human rights", CLAR underlines, highlighting that lay martyrs like Manuel and Nelson and many others, "show us the path of a lifetime committed to the preferential option for the poor and to the defense of human dignity". "Today the Church gives the word martyr four concrete faces which, together with the numerous men and women religious of various Congregations throughout Latin America and the Caribbean, and also lay people committed to life and the Gospel, shed their blood for the Kingdom of God and justice".
CLAR further stresses that "this martyrial religious life of Latin America is inscribed within the very numerous martyrology of Latin America and the Caribbean, which includes Bishops such as Romero and Angelelli, priests, catechists, pastoral workers, peasant leaders, indigenous people, women, children, the elderly, young people, entire massacred populations".
"Martyrdom - the text still recalls - is part of the current history of the Church in Latin America and the Caribbean". The example of these brothers and many other martyrs, challenges all religious life and the whole Church: are we worthy companions and successors of these martyrs? Do we continue to live their radical choices, their martyrial witness? "Let us learn from them - concludes CLAR -. Like Jesus and for the same reasons as Jesus". (SL) (Agenzia Fides, 22/1/2022)

VATICAN - Pope Francis: May Pauline Jaricot's example arouse in everyone the desire to participate in spreading the Gospel in the world

ASIA/INDONESIA - Consecrated life, a gift for the Church and society

AMERICA/CHILE - Meeting of Bishops and pastoral workers of human mobility on the border of Bolivia, Peru and Chile