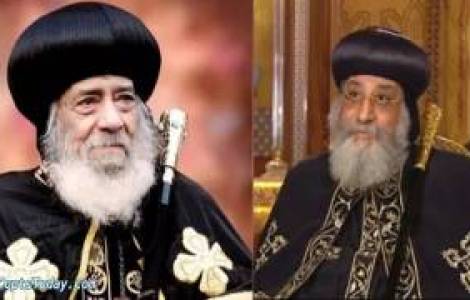 Cairo (Agenzia Fides) - Coptic Orthodox Patriarch Tawadros II praises Egyptian President Abdel Fattah al Sisi, invokes divine blessings on the champion footballer Mohamed Salah and holds back - for the moment - on any projects aimed at making a film about the life of his predecessor , Coptic Patriarch Shenuda III, who passed away in 2012.
In a long and detailed television interview with the journalist, Ahmed Tahiri and broadcast on Sunday November 14 on "Extra News" channel, Pope Tawadros provided answers on a wide spectrum of topics, ranging from sports to politics, from the condition of Christians in Egypt to remembering his teachers in faith.
The Primate of the Coptic Orthodox Church firmly reiterated that Christians in Egypt are not treated and cannot be labeled as "second class citizens" compared to their Muslim compatriots, and at the same time he recognized with realism and without recriminations that the path to the full affirmation of the principle of citizenship represents a gradual process, and comes to an end only when it - thanks also to the support of political and educational institutions - becomes part of the common culture and mentality shared by the people. In this regard, Pope Tawadros spared no praise for the current Egyptian presidency. Comparing the leadership of al Sisi with that exercised by his predecessors Hosni Mubarak, Anwar Sadat Gamal Abdel Nasser and Mohamed Naguib, the Patriarch declared that in 7 years of managing power, the current President has achieved results that in different circumstances would be achieved in no less than three decades, and also expressed appreciation for the expression "New Republic" recently coined by al Sisi and his staff as a synthetic formula to define the present and future horizon of his action at the helm of the populous North African country. Moving on to lighter topics, Pope Tawadros confided that he is a football fan and that he follows with particular pleasure the sporting performances of Mohamed Salah, the Egyptian striker: "I listened to him even when he talked about climate change in a meeting with Prince William", added the Patriarch, also praising the human skills of the sportsman and hoping "May God bless him in his legs, both right and left, which he uses in an impressive way".
Regarding the recurring rumors about the possible making of films dedicated to the imposing figure of his predecessor, Patriarch Shenuda III (1923-2012), Pope Tawadros reported that he endorsed this prospect in the long term, but added that the time has not yet come to start such a project. The image and memory of Pope Shenuda - Patriarch Tawadros clarified "is still present in all of us", and any cinematic reconstruction of his life would inevitably fall short of the image of the Patriarch kept in the memory of those who knew him, regardless of the skill and competence of directors and actors. Tawadros himself acknowledged that he was struck by the figure of Shenuda, "eloquent speaker and poet", who led the Coptic Church as Patriarch for 41 years. "I met Pope Shenuda more than once, we all learned from his books, from his lectures, and our direction in the monastic life developed in large part thanks to him, who was very passionate about monasticism". Continuing his conversation, Patriarch Tawadros also mentioned his parents, primary school teachers and priests who most favored his Christian journey and the flourishing of his monastic and priestly vocation. In addition, Pope Tawadros recalled that he was impressed and helped by the figure of Patriarch Kyrillos VI, who unlike his successor Tawadros was neither a theologian nor a brilliant preacher, but manifested his holiness in the "unassuming" gestures of everyday life.
In March 2016, as reported by Fides (see Fides, 2/3/2016), the Council of Coptic Orthodox lay congregations–influential body in the Coptic Orthodox Church, presided by the Patriarch himself – had cautioned producers of television series, films, and documentaries, from attempting without the approval of the Church any initiative to make a film on the life of Pope Shenuda III. The historical story of Pope Shenuda - a statement released by that body explained at the time - "belongs to the Church", and no film or other about the life of the Patriarch may be produced without the necessary permission of the competent Church authority, which will not hesitate to take legal action to safeguard its prerogative. (GV) (Agenzia Fides, 15/11/2021)

ASIA/BANGLADESH - Sport for the promotion of women and dialogue: the nation greets the football champions

ASIA/CHINA - Pope Francis: may the Beijing Olympics "bring about a more fraternal world"