AMERICA/BOLIVIA - "God wants there to be no more bloodshed, dialogue is the best way": the Bishops in the face of violence 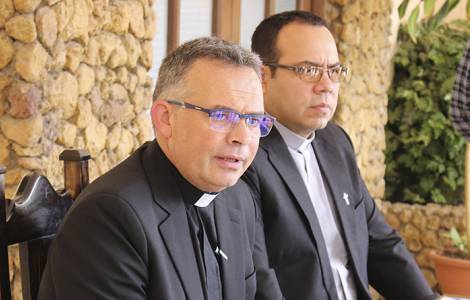 2022-01-07
Caritas Bolivia will continue to help migrants at the borders with Peru, Chile and Argentina in 2022

2021-12-15
The bishops: contemplating the family of Bethlehem, every home becomes a school of growth and positive experiences

2021-11-30
The Archdiocese of Santa Cruz after the new attacks: "Yes to the defense of women, but not with violence"

Cochabamba (Agenzia Fides) - "God wants there to be no more bloodshed; our position is to invite both parties to sit down to dialogue, no confrontational position, we must no longer mourn the dead.
Every human life is unique and unrepeatable, dialogue is the privileged way to put forward ideas and reach agreements, without opting for violence and confrontation", said Father Diego Plá, Assistant Secretary General of the Bolivian Bishops' Conference during a press conference on the eve of the Assembly of Bishops.
Opposition groups to the government's Movimento Al Socialismo (MAS) have called for an indefinite national strike from November 8, against Law 1386 on the "National Strategy to Combat the Legitimization of Illicit Gains and the Financing of Terrorism". The government described the strike as an attempt to destabilize the country's governance and deployed large police forces across the country to ensure the free movement of goods and people. Violent clashes between demonstrators and the police broke out in some departments. The Defensoria del pueblo Office reported that during incidents in Potosi, a young farmer died and 63 others were injured. "We are sorry that there is a death in Potosí, the Bishops always ask that there be the possibility to sit down to dialogue, we believe that violence is not the way", said Father Diego Plá, according to the note from the Bishops' Conference sent to Fides. The priest reaffirmed that the Church will always have a position of facilitator, if both parties ask for it: "the Church is at the service of the people of God, the priests and the Bishops are servants of our people, and if the people ask us for a service, we will be there to help and collaborate".
Regarding police interventions, he urged them to avoid any form of violence, so that we do not have to deplore further human losses: "Each institution always performs its service in a correct, consistent, responsible, and always, looking at what we are, all brothers, we are Bolivians, and on both sides there are parents, brothers and family members, always ask them for an attitude of peace, no confrontation and violence, life is a good that must be taken care of ".
The 109th Assembly of the Episcopal Conference of Bolivia will be held from November 11 to 16 in the "Cardenal Clemente Maurer" House of the Archdiocese of Cochabamba. As always, the Bishops meet to analyze and reflect on the social, political and religious situation of the country, "because we want to be a Church embodied in the reality of its people and not a Church remote from reality", said Fr. Plá. During this Assembly, the Bishops will also elect the authorities for the next three years. (SL) (Agenzia Fides, 11/11/2021)

AMERICA/HONDURAS - The Bishops: "Let us undertake the serious and responsible commitment of the reconstruction our country’s needs"