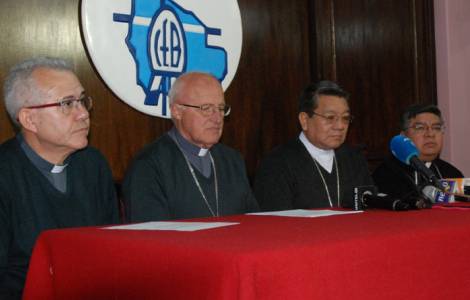 La Paz (Agenzia Fides) - The Bolivian Episcopal Conference (CEB), representatives of the European Union and the United Nations officially convened the national dialogue table yesterday, November 18, at 2.30 pm, with three objectives: to pacify the country, to define the agreements for new general elections, to agree on the election of a new Supreme Electoral Court.
In the video sent, Mgr. Aurelio Pesoa Ribera, O.F.M., Auxiliary Bishop of La Paz and Secretary General of the CEB read the statement during a press conference, which was also attended by Mgr. Eugenio Scarpellini, Bishop of El Alto and National Director of PMS Bolivia.
"Dialogue is the appropriate way to overcome the differences between Bolivians, so we invite everyone to respond to this invitation. Holding new, transparent and reliable elections, is the best way to overcome differences in a democratic and peaceful way. We ask the media and media leaders to lower the tone of public statements to facilitate dialogue and understanding among all", reads the text sent to Fides. The communiqué concludes: "God bless and help everyone, especially political and social leaders, to fulfill their personal and historical responsibilities for the pacification of the Country".
Bolivia has experienced moments of bitter violence during the clashes of groups in favor of former President Morales, now abroad, and opposition groups. Parallel to the political proposals, a popular confrontation on religious symbols has developed. Agenzia Fides reports the Infodecom editorial, which explains that "It is not a war between God and the Pachamama". "We believe that the Word of God cannot be used as a sign of racial supremacy or as a political party property. The presence of these sacred signs, such as the cross or the rosary, should be gradual and in no case be seen as a trophy", writes Infodecom in the editorial sent to Fides.
"Let us not fall into the trap of a political, social or cultural sector, taking possession of signs and symbols that belong to everyone and that represent above all the truth, the journey and peace, that is the opposite of the violence being carried out these days", continues the editorial.
"We believe that the role of religion can be very useful in this dramatic moment, religion will not remain alone in the sacristies as many would like ... We must start a school of reconciliation", concludes the text. (CE) (Agenzia Fides, 19/11/2019)

AMERICA/NICARAGUA - "Politics is not the simple art of managing power, resources or crises", warns Bishop Álvarez, in the face of the increase in violence