AMERICA/BOLIVIA - The Bishops: "To renew the prophetic missionary service in the Bolivian people" 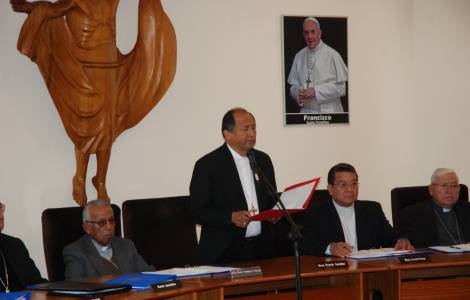 2020-09-22
"Being a politician according to the Gospel": reflections in time of elections and in the midst of the pandemic

2020-09-14
Mgr. Arana: "It is urgent to build a culture of reconciliation, politicians must avoid clashes in this pre-electoral period"

2020-07-29
Campaign: "United for health and for life" - religious groups in support of the health system

Cochabamba (Agenzia Fides) - The Bishops’ Conference of Bolivia (CEB) hopes that equal opportunities, respect and consideration for all will be guaranteed in the general elections on October 20. The text of the Presidency of the CEB was read during the inauguration ceremony of the CVI Assembly of Bishops, which takes place from 2 to 7 May at the headquarters of the CEB in Cochabamba.
Bishop Ricardo Centellas, Bishop of the Diocese of Potosì and President of the CEB, read the programmatic message and recalled that the purpose of this meeting of the Bishops is to "Renew the prophetic missionary service in the Bolivian people".
After a first part in which all are invited to be involved in pastoral work with young people under the guidance of the Apostolic Exhortation "Christus vivit", Bishop Centellas touched the theme of the word "ecology", the common home, which also means protecting the life in every form, therefore a great respect for nature and natural order. In Bolivia, this issue specifically affects the areas of Tipnis and Tariquia, large natural parks.
The third point is that of the elections: "this process towards elections should become a path between equals, with respect and consideration, giving everyone the same opportunity to present their proposals". The elections must be "a democratic space so that the people make their will known", then he added: "politics is a means to build society and human activity, but when those who engage in politics do not experience it as a service to the human community, it can become an instrument of oppression, marginalization and even destruction".
Mgr. Centellas emphasized that "honest politics constantly seeks the common good, it is one of the highest forms of exercising charity".
For this reason the message invites to "real and objective self-criticism, able to generate a culture of encounter and true sincere dialogue, respecting freedom, convinced of promoting and defending life, beyond ideologies, of political, cultural and religious position".
The programmatic message of the Bishops of Bolivia marks some important challenges for the Bolivian human development agenda:
- integrated education to achieve true industrialization and human development;
- food security and genuine autonomy;
- address institutionalized corruption and the spread of drug trafficking;
- deepening of social inequality and illicit enrichment;
- politicization of justice and law;
- transparent management of state resources;
- eradication of the culture of violence, in particular towards the most vulnerable people, such as women and children.
Furthermore, the Bishops call to the care of the Amazon, the "common home", warning of the possibility of a conflict over water and invoking a personal conversion and an ecological conversion.
Finally the message recalls that this Assembly is celebrated "as a sign of communion" around the risen Christ, with the presence of 35 Bishops from 18 ecclesiastical jurisdictions. Special guests are Cardinal Toribio Ticona, Prelate emeritus of Corocoro, and Archbishop Angelo Accattino, Apostolic Nuncio, who presided over the inaugural Mass. (CE) (Agenzia Fides, 3/5/2019)

AMERICA/COLOMBIA - "We are in the same boat, we row together": Migrant and Refugee Week

ASIA/PAKISTAN - Year of Youth in Pakistan: the Church presents the translation of the Bible in Urdu of the "Youcat" youth

AMERICA/BOLIVIA - The forest has been burning for two months: the Bishops ask for the intervention of authorities and harsh sanctions for those responsible