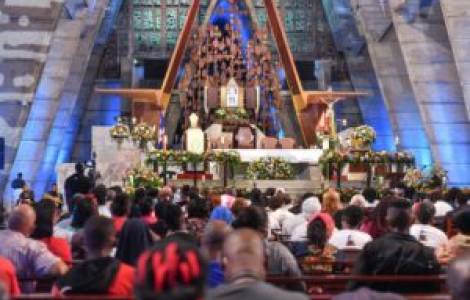 2023-01-24
The synodal path is not just "walking together", but with Jesus, in Jesus, from Jesus and toward Jesus

2023-01-11
Birth of the Association of Catholic Universities, for a greater presence of the Church in society

2022-10-10
Committed to proclaiming and living the value of honesty in the family, in education and in society

Santo Domingo (Agenzia Fides) - "We live in a time characterized by individualism, indifference and the search for personal fulfillment, without taking others into account. Walking together forces us to become aware that the conquest of good and human happiness is only possible when we assume common tasks. The Second Vatican Council reminds us that the Church in today's world is called to listen to their cries and accompany their dreams".
The Dominican Bishops' Conference (DBC) dedicates its annual pastoral letter to the theme "Synodality, the path of ecclesial identity", pointing out individualism as the root of many of the ills of society that destroy life, and the excessive ambition of wealth leads to the disproportionate exploitation of natural resources and the destruction of the environment.
The document was published as always on the solemnity of Our Lady of Altagracia, the Patron Mother of the Dominican people, which bears the date of January 21, 2023. The bishops explain that they were inspired for this year's theme by the common sentiment of the universal Church, called by Pope Francis to the Synod on Synodality, "a time of profound reflection on the new challenges presented by the modern world and how the Church can respond to them, guided by strength and action of the Holy Spirit.
In their extensive document, the bishops explain that synodality "consists of recreating and dynamizing new spaces that promote the encounter of communion and participation among all the brothers of the Church, groups, communities and apostolic movements." When describing the relationship between synodality and the Bible, they highlight, among other things, that "listening is mission and proclamation": "Synodality requires that every member of God's people is able to empower themselves and participate in the ecclesial path of communion and participation of all in the mission". Synodality, moreover, "precisely expresses the pilgrim character of the Church", which assumes "the challenges of each person and of each age" to give reason for her hope in the midst of each human reality.
Speaking of "Synodal Spirituality", the Bishops made it clear that "if we do not fully consider the spiritual dimension of synodality, this synodal path can be reduced to an 'ecclesial convention', to 'a conference of studies', to ' a political congress' or a 'parliament'. Synodal spirituality requires a profound change of mentality, at a personal, community and structural level, a deep conversion process, which makes us abandon the past to go out to meet others and walk with them. "This Christian synodal path is not carried out just by walking together, or in any way, but rather it is a very particular walk, with Jesus, through Jesus, in Jesus, from Jesus and towards Jesus."
The Bishops urge to live synodality in the celebration of the sacraments and the liturgy, as well as in discernment, "which cannot be a solitary process", and reaffirm the need for pastoral conversion in order to be a synodal Church, which, as such, be a sign of fraternity among nations marked by divisions and conflicts of interests. The cry of the people demands a solution to so many evils, some of them historical, such as corruption, extreme poverty, unemployment, lack of opportunities, deficiencies in health, education, services, to which is added common crime, without forget the spiritual poverty “that dwells in the heart of modern man pushed away from God”.
There are many places in which to live synodality: first of all the family, "a privileged space to learn to walk together"; then the parish, with its various articulations and structures, "which must be organized and function as true spaces for the realization of a synodal Church"; the particular Church, guided and animated by the Bishop; the apostolic movements and new communities, "called to collaborate for the growth of the particular Church, united with the Bishop and the entire diocesan community"; lay institutions, "putting their charisms at the service of others and practicing unity in diversity"; the consecrated life, whose members "form part of an entirely ministerial and synodal Church".
The bishops point to the National Pastoral Plan as an instrument of the "outgoing Church" that wants to respond to the challenge of evangelization by promoting "a new, missionary and planned evangelization" that, based on reality, brings together the different pastoral agents and apostolic movements around common purposes, "giving life to a Church that lives and seeks to live communion and participation".
The document concludes by highlighting the need to "grow in the synodal spirit" and in this sense indicates some concrete steps to take: Carry out a dynamic and attractive evangelization; encourage more use in the media, to strengthen the formation of pastoral areas and leaders, to cultivate fraternity, to work in teams, to identify gifts and talents in the communities. Promote more the life of prayer in our faithful; favor in our communities the service to vulnerable groups and continue to strengthen the presence of pastors in the people of God. (SL) (Agenzia Fides, 24/1/2023)

ASIA/PHILIPPINES - Christmas, a time to listen, dialogue, walk together, pray with "Simbang Gabi"