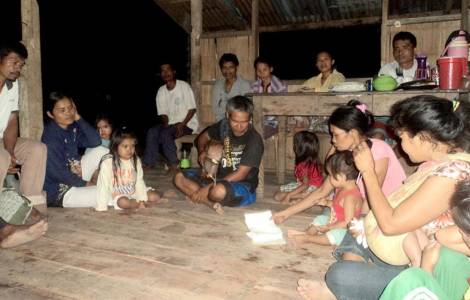 Cagayan de Oro (Agenzia Fides) - The proclamation of the Gospel on the island of Mindanao, the second largest island in the Philippines, goes forward thanks to the experience of the basic ecclesial communities (BEC), in which people, in the different states of life, experience faith and Christian life. Men, women, priests, religious, young people, families, are part of it, give their witness of faith and, in this way, are missionaries. This is what is stated in the 17th Mindanao and Sulu Pastoral Conference (MSPC) underway from 7 to 11 November, 2022 in Cagayan de Oro, a city in the north of the island, focused on the theme "The gift of faith and the new evangelization as Synodal Church".
The delegates present - bishops, priests, religious and laity from 21 ecclesiastical circumscriptions, including dioceses, prelatures and vicariates in the southern Philippines - share and enhance the experience of the basic ecclesial communities, widely spread on the island of Mindanao, recognizing its intrinsic value of ecclesial experience in a synodal style, as marked by an inclusive and participatory character of all the members of the People of God who make a contribution to pastoral care and mission, each for his or her state of life and according to the charism received.
These small communities were started in the late 1960s, immediately after the Second Vatican Council, by foreign missionaries who arrived in the vast territories of Mindanao and the surrounding islands. The Mindanao-Sulu Pastoral Conference, which was held for the first time in 1971 and has met every three years since then, has historically been a supporter of this form of Christian life, considered adequate and fruitful for pastoral work in that territory.
"More than the past 50 years the BECs have cultivated and strengthened people's faith; now it is important that they can contribute to the transformation of our society, to respond to the challenges of a complex society of today and of the days to come", notes Redemptorist priest Karl Gaspar, a professor at the St. Alphonsus Theological and Mission Institute in the city of Davao.
In the same perspective, the Archbishop of Cagayan de Oro, Jose Cabantan, during the conference hoped for "a faith that does justice", that "becomes practice and illuminates social, economic and political life". "Mindanao bleeds due to issues related to freedom and peace; our conference of faithful looks outward to promote justice and charity in our land. By listening to the whisper of the Holy Spirit in our hearts, we are called to the mission and we fulfill it", he said. Even Archbishop Charles Brown, Apostolic Nuncio to the Philippines, taking part in the Pastoral Conference, exhorted the delegates "to proclaim the Gospel with commitment, creativity and courage".
The ecclesial communities based in Mindanao - recalled the delegates present at the Conference - women are engaged in catechesis, both as readers and to comment and update the Gospel in liturgical celebrations, often organized in the family. The presence of the laity is significant in organizing pastoral life, but also in supporting, in solidarity, the poorest families and in promoting a dignified life for all.
On the island of Mindanao, including the secondary islands that surround it, there are about 25 million inhabitants (a quarter of the entire Filipino population), a multicultural and multi-religious population, with a majority of Catholics, and the presence of a Muslim autonomous region, where about 6 million Muslims live, and also with the presence of indigenous peoples ("lumads") animists.
The area is marked by a high poverty rate: although it represents the nation's "granary", it is endowed with beauty and vast natural resources, it is among the least developed areas of the nation and is home to a third of the poor in the Philippines. According to data from the Philippine government, about 40% of the resident population of Mindanao lives below the minimum poverty line.
As for the organization of ecclesial life, parishes generally welcome thousands of families, and each of them has dozens of "mission stations" or networks of basic ecclesial communities, where lay people and catechists are actively involved, helping the needy and the marginalized, often placing themselves alongside indigenous groups. In the Catholic Church of the Philippines, the mission in Mindanao represents for many a genuine call to leave their comfort zone to embrace a new frontier, bearing witness to the Gospel among the poorest or among populations who do not know Christ. (PA) (Agenzia Fides, 10/11/2022)

ASIA/BANGLADESH - Giving one's life to Christ to be happy. The testimony of five consecrated sisters

AMERICA/PARAGUAY - Pact for education, land, indigenous peoples, elections and commitment of the laity to transform Church and society