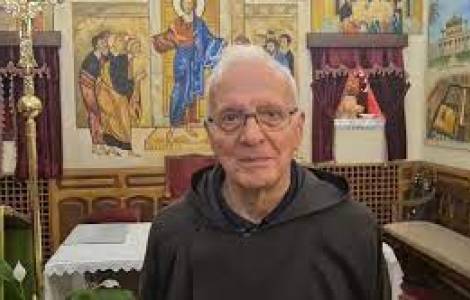 2022-08-27
Discontent and "discomfort" for the new regulations of the Foundations. The Armenian Patriarch appeals to Erdogan

2022-08-22
For the first time in the history of the Turkish Republic, an Armenian becomes Governor of a district

by Gianni Valente
Antakya (Agenzia Fides) - For the 86-year-old Italian Capuchin Father Domenico Bertogli, who comes from Modena, the time has come to say goodbye. At the beginning of November he left his parish of St. Peter and Paul in Antakya, the old Antioch on the Orontes, which he had founded and led with apostolic passion on the model of the "Domus Ecclesiae" of the first Christians. Even on his last day there, he was surrounded by Christians and Muslims, residents of the Turkish city and pilgrims who had come from far away, lifelong friends and people he had just met.
Father Domenico had already resigned from his position as parish priest last May "for reasons of age". Since then he has remained in Turkey and accompanied the pastoral work in St. Stephen's Catholic Church in Yeşilköy, 20 kilometers from the center of Istanbul. At the end of October, on the occasion of his 60th anniversary as a priest, he celebrated a Mass to commemorate his 56 years of missionary activity in Turkey (he was in Izmir before Antioch). In this mass and also in a letter he had written a few days earlier, he said goodbye to the Christians in Antioch with words full of hope and sober emotion. He assured everyone that his heart remained in this city where for so many years he had tried to put himself at the service of baptized Christians on their journey of faith. "For everything I succeeded in doing" wrote Father Domenico "we thank the Lord. For everything I did not do well, I ask for forgiveness and understanding".
In the letter, Father Bertogli also thanked his closest collaborators one by one ("Let us not be sad. Have courage, we are all on the way to the risen Lord"). "In my life", Father Domenico added in an interview with Fides, "I have always chosen the path of obedience and have stayed in the places and in the situations to which I was sent. This is what I was able to put into practice, and I am confident that things will continue because it is the Lord who works in our obedience".

The mission of Domenico Bertogli (and the entire recent missionary adventure of the Capuchins of Emilia-Romagna in Anatolia) was blessed by facts and encounters that are gratefully preserved in the memory of the local Christian communities. A memory already charged with the suggestions that for two thousand years have surrounded places and events linked to the first apostolic proclamation for every Christian soul.
Father Domentico, who arrived in Antakya at the end of the 1980s, already then began to restore two old ruined houses of the ancient Jewish quarter, where the city's first Christians probably lived. After completing the work, he had the Turkish inscription Türk Katolik Kilisesi (Turkish Catholic Church) carved on the stone above the entrance to show everyone that even in modern Turkey, Christianity is not a foreign faith. The Alawite Muslim architect Selahattin Altinözü renovated the church and attached house, adopting the oriental style of the old Antiochene residences: arcades and columns, ornate windows and stone fountains, and ogival terraces. Thus, over the years, Father Domenico's Domus ecclesiae has also become a city attraction, a must-stop for pilgrim groups or individual travelers. Even Muslim and Jewish family clans in the city have often asked to celebrate their festivals in the courtyard of the house under fragrant orange and grapefruit trees. Above all, a web of Christian life has developed around the Church, blessed also by the gift of ecumenical unity among those who bear the name of Christ. In Antioch, Father Dominic and the priests of the Greek Orthodox Church have always celebrated joys and sorrows, celebrated festivals and endured difficult times together. In recent years, inspired by the experience of the Neocatechumenal Way, Orthodox Christians have also participated in catechesis in the parish. And since 1988, with the special permission of the Holy See, the Catholics of Antioch have been celebrating Easter ad experimentum on the day established in the Orthodox calendar. So the disparities in Easter celebrations, which are the most obvious and painful sign of Christian disunity throughout the Middle East, are tentatively resolved in this city.
For decades, Father Domenico reported on the everyday life of a group of Christian brothers and sisters in the Chronicles of Antioch, a kind of diary of the community that has been published month after month in recent years and sent every year to friends scattered all over the world take life as it comes.

In Antioch on the Orontes, the apostle Peter had already arrived after the death and resurrection of Christ and stayed there for a long time. For this reason the city was Sedes Petri before Rome. In the Letter to the Galatians, where Paul tells of the discussion he had precisely with Peter on a question that arose precisely in Antioch. Peter, at first was cordial with the pagans of the city who had become Christians, then began to avoid them, out of awe of Christians of Jewish origin who considered the observance of the Mosaic law as an indispensable requirement for the salvation promised by Christ. Then the matter was discussed in Jerusalem by the apostles and elders gathered in the first council. The apostolic letter that came out was sent primarily to the community of Antioch, to remind that the newly baptized pagans should not be imposed "any other obligation apart from these necessary things: abstain from meat offered to idols, from blood, from animals suffocated and by shamelessness".
Father Domenico experienced and testified on the long journey that he covered with his friends in Antioch, again and again the same attractive freedom that touched the hearts of Peter and Paul. The happiness of being part of a story where you can ask the Lord for anything without having to make sacrifices. (Agenzia Fides, 10/11/2022)