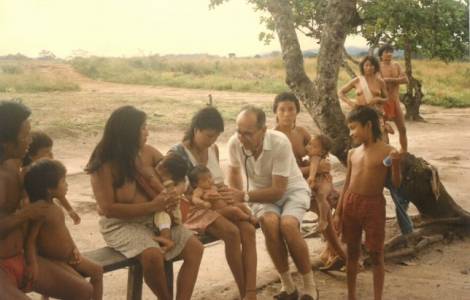 Macapà (Agenzia Fides) - The Camillians of the Amazon are also spokespersons for the cry of the Earth, which can no longer be ignored. Father Marcelo Valentim de Oliveira, a Camillian religious and doctor, is committed to helping communities in the Amazon, threatened by health problems linked to the lack of medical care, climate change and land grabbing for commercial and construction purposes (see Fides, 13/12/2021). During the Covid-19 pandemic emergency in 2020, the missionary worked with health personnel in the Boa Vista-Roraima region at Campanha Hospital. "The day of discharge from the hospital was always a time of great celebration," he says. The cured patient left the hospital through a garden, accompanied by a person from the team who had assisted him during his hospitalization: he walked along a corridor formed by health professionals who applauded him and shouted his name. He rang a bell and was greeted by the hugs of his family and friends".
After completing his service in Boa Vista, Father Marcelo moved to Macapà, in the state of Amapà, to continue caring for needy patients. It is here that the Camillian Mission set up a 192-bed hospital as well as a healthcare plan for the more than 300 communities scattered across the region.
Among the religious in Brazil, who have grown over the years in number and geographically and are now present in different parts of the country, the charism of the Camillian Fr. José Raul Matte (1934-2021) is of particular importance. The doctor of medicine with a specialization in pediatrics, had moved to Macapà in 1972, where he served as a missionary in the Amazon region for forty years, working in hospitals and visiting churches along the Amazon. "We have arrived at the hut where José lives," says a report from the religious on a home visit, "a man who did not know his age. He was baptized by his parents immediately after his birth because they doubted that he would survive. He suffers from an upper and lower limb deformity. Beaming with joy, he tells me ": 'I have always prayed that one day I would meet a priest and make my first confession and communion'. In every community we are received with solemn tones; this makes it much easier to be received by the people and inspires confidence in the word we proclaim". In these words of Father Raul the whole essence of the mission of the Camillian Order is summed up.
The phenomenon of deforestation has destroyed more than 185 million hectares of forest throughout the Amazon since 1978 and the rate is steadily increasing (see Fides, 6/5/2022). Cacique Odair ('Dadá') from the Borari people has collected and disseminated worrying data. The Borari people live in the indigenous territory of the Maró, in what is now the Brazilian state of Pará. The Maró areas include ancient forests teeming with life and beauty, invaded by illegal loggers. Cacique managed to capture photos of these illegal activities that provided evidence and compelled government agencies to take action. Today he leads a health program for tribal peoples, which brings together different initiatives under the common demand for the dignity of tribal people. At the same time, we are training the next generation of leaders to take action to protect the country. (AP) (Agenzia Fides, 27/10/2022)