AMERICA/HONDURAS - Bishops: Just economy as a basis for peaceful coexistence 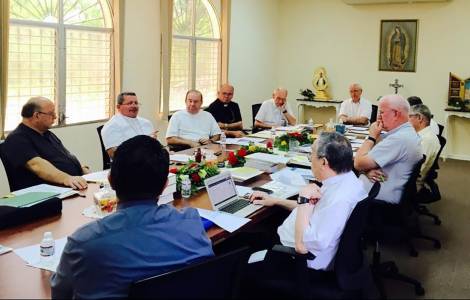 2022-10-13
Bishops: Just economy as a basis for peaceful coexistence

2022-01-25
The Bishops ask for sincere and open dialogue, in order "not to endanger the rule of law"

2021-12-28
The Bishops: "Let us undertake the serious and responsible commitment of the reconstruction our country’s needs"

Tegucigalpa (Agenzia Fides) - In a message published at the end of their Plenary Assembly, the Bishops of Honduras appreciate the peaceful climate following the transition to the new government, while expressing their concern for problems that continue to plague the country under the new government.
The bishops call on the citizens of Honduras to "follow the path of dialogue and reconciliation" and "not to fall into the practice of so-called individualism" but to pool joint efforts in concrete actions: "This is the only way we can go into the future of Honduras, with a national project for the benefit of all, especially those most in need".
First of all, the bishops ask for solidarity "for the populations affected by the floods and landslides in residential areas, which have lost crops and material goods in many areas of the country" and deplore "the irresponsibility of the authorities
who have the duty to prevent such disasters from happening again", and the lack of immediate and effective relief measures.
Another aspect to which the bishops draw attention is the phenomenon of corruption, "which, according to the Church's social teaching, undermines the proper functioning of the state, creates distrust in public institutions and politics and weakens institutions". "This serious problem, which should have been solved long ago", now requires the greatest possible determination in the fight against it. "We call on all of society not to remain indifferent to injustice," the bishops write. It is also necessary that "the judiciary respects the rights of Honduran society and all people". In this sense, "the government, which is responsible for selecting the best judges for the Supreme Court, should "resolutely reject any intention of manipulation".
Citizens who have the necessary experience and professional skills are called upon to volunteer generously for this task.
In the final point of their message, the bishops stress the need for citizens to "demand a just exercise of justice" from their representatives in Parliament. In this context, they want an end to the uncertainty "about the legitimacy or non-legitimacy of the leadership of the National Congress" and appeal to the bodies entrusted with this task to clarify this question in order "to contribute to the correct democratic path of the country".
"Despite the discouraging signs we are seeing, the Honduran people," the Bishops conclude, "carry in their hearts many other hopes. We need many small seeds from which to sprout a just and enriching economy, peaceful coexistence and solidarity .We need opportunities that become realities, realities that keep that hope alive and active."
Honduras has long faced many serious problems, starting with the extreme poverty rate (36.7% of the population) and the concentration of wealth in the hands of a few. On November 28, 2021, Xiomara Castro, representing the Progressive Party, won the presidential election after 12 years of Conservative government. Its program includes combating poverty, violence, social and civil discrimination, and corruption in politics and the judiciary.
The bishops of Honduras have repeatedly denounced the country's serious problems: "Our national problems are not simply economic, but structural. The structures have remained the same. Corruption and impunity still cast their shadows, which exceed the legitimate expectations of voters, who voted for a necessary change". The bishops reaffirmed that "the country belongs to everyone and not to any particular group" and denounced polarization and the pursuit of self-interest that "seriously undermine genuine democracy." Only sincere social dialogue and the search for the common good can pave the way for a genuine renewal of Honduras and the necessary reconciliation (see Fides, 15/6/2022). (SL) (Agenzia Fides, 13/10/2022)

AMERICA/VENEZUELA - "Let's not wait for things to improve by themselves, but we trust in God's help, taking risks together to build a better country"

AMERICA/ARGENTINA - Just as we have been united in sporting joy, we also face the different problems of society together

AFRICA/GHANA - Bishops warn: 'People's anger and frustration are on the rise'