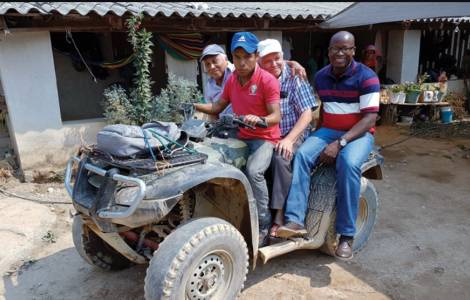 2022-09-24
In the USA for 75 years: Pontifical Institute for Foreign Mission looks back and thinks about the future

Detroit (Agenzia Fides) - "Our mission today is rooted in tradition and at the same time looks to the future: it is about the proclamation of the Gospel, proclaimed as a witness to the miracles of God and sown in society like a mustard seed", said the Italian Missionary Father Daniele Criscione, of the Pontifical Institute for Foreign Missions (PIME), Director of the Institute's Mission Center in Detroit, to Fides. He recalled that in 2022 PIME celebrates the beginning of PIME's missionary adventure in the North American country 75 years ago.
"We came here after the end of the Second World War: it is a story full of faith, audacity and missionary imagination. The beginnings were difficult, but generous. We should remember the pioneers of this adventure, able to fully and to be fully committed to the gospel, to empathize deeply with the American people and their culture, to plant new Christian communities and to seek cooperation throughout the church," said the missionary.
According to Father Daniele, PIME's evangelization work dates back to 1947, when Cardinal Edward A. Mooney, who knew the Institute, was Apostolic Delegate in India. When he needed priests to care for the Italian emigrants in Detroit's industrial area, he thought of the PIME missionaries and invited them to settle in Detroit. They took over St. Francis Church in the northern suburbs of Detroit, where PIME missionaries still provide pastoral ministry today. Other parishes led by PIME missionaries followed, such as All Saints Parish, also in Detroit, and St. Anne's Parish in New York City, whose parishioners were Latin American expats and ethnic minority Catholics. Since 2015 there has also been a community in Brooklyn for the special pastoral support of the Chinese congregation abroad. The PIME Mission Center in Detroit, the operational center of the institute, coordinates the organization of various missionary activities and publishes the magazine "Mission World".
"People appreciate our presence - says Fr. Daniele - and this is expressed in the form of a great turnout: this is evidenced by the numerous vocations, the interest in the activities of interreligious dialogue and the many people who follow us and support the evangelizing mission of the Church".
The Director of the Mission Center reports: "Thanks also to the PIME missionaries, the American Church, conscious of its universal missionary vocation, went out with joy and on the basis of a courageous witness of faith".
"The celebration of the 75th anniversary of our presence in the United States," concludes Father Daniele Criscione, "is a good opportunity to remember what the Lord has achieved and to thank him for it. And to express gratitude to those to look back, who lived intensive times of faithful apostolic service committed to the missionary commission of Jesus and thus inspire us for the future". (ES) (Agenzia Fides, 24/9/2022)

EUROPE/ITALY - A Scottish woman, missionary in Egypt and the Middle East, at the head of the Comboni Missionaries