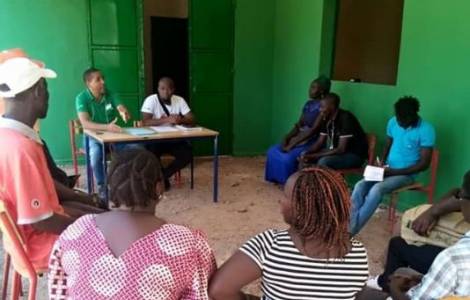 Bissau (Agenzia Fides) - "Guinea Bissau in recent years has experienced many moments of instability, in addition to various armed conflicts and the war of the late 1990s. The country has experienced great difficulties in regaining normality and enjoying institutions that fully function. The moments of instability in social and political life due to the various conflicts have been numerous, and in the face of this situation, the need for national reconciliation became urgent. It was evident that work had to be done to restore peace to the country. For this reason, in Parliament, the creation of a commission to work for this reconciliation and lead to a national conference was considered of vital importance, following the example of what has happened in other countries, such as South Africa. People began to talk about it at the beginning of the millennium and in 2002 the idea of creating this body was born. In Parliament, they judged that it would be better to entrust the leadership to religious leaders rather than politicians, and thus, since 2014, the presidency was entrusted to a Catholic priest, and the vice-presidency to a representative of Islamic faith and one of evangelical confession. For the rest, the Commission is made up of representatives of political institutions (parliament, ministries) and then of civil society: the movements, the whole of society is represented by this Commission". This is how Father Domingos Cà, priest of the diocese of Bissau and president of the Commission for National Reconciliation in Guinea Bissau, summarizes to Agenzia Fides the path that led to the creation of a national body to seek peace and stability in the country.
"This Commission - continues the priest - had the task of leading to the organization of a national reconciliation conference. We carried out a patient work of listening to all the social realities present in Guinea Bissau. We traveled the length and breadth of the country to listen to the people and understand everyone's thoughts on the urgent need to reconcile and turn page. A final report has been presented and the only thing missing at this moment is the date and the modality of holding the conference. In the meantime, there has been a change of government (in 2018, ed) and president (2019, ed) and work has stopped. The last step, deciding the date and the modalities, is up to the President of the Republic".
The Catholic Church, although it represents a minority of the population, enjoys the confidence of all - as is also shown by the appointment of Father Cà as President of the Commission - and is a solid point of reference. “The most practiced religion - he says - is the traditional one, then there are Muslims and Christians, among whom Catholics are the majority. In the last 20 years in which the country has experienced many moments of crisis and conflict, the Church has always been a fundamental element in the search for peace. The Church in Guinea Bissau enjoys the great confidence of the people, of all citizens of whatever religion or ideological or political affiliation. She has always intervened in the search for reconciliation among the people, through the messages and pastoral letters of the Bishops, exhortations and other means to encourage the formation of consciences ready for a change in mentality".
There is another field in which the Church is very present and it is the social one: "We can say that the Church in Guinea Bissau - he observes - is seen as a model, it is recognized by the whole society, including politicians, for the great role it plays in schools and health. "In the last two years - he continues - the public school has barely functioned due to the numerous strikes of teachers who do not get paid regularly, and the only schools that work constantly are the private ones, most of which are Catholic. Even in the field of health, many hospitals, health and nutritional rehabilitation centers, as well as institutes for the promotion of women's rights and health, are the work of Catholics. In addition to direct evangelization, of course, the Church is recognized throughout the country for this social dimension". (LA) (Agenzia Fides, 3/9/2022)