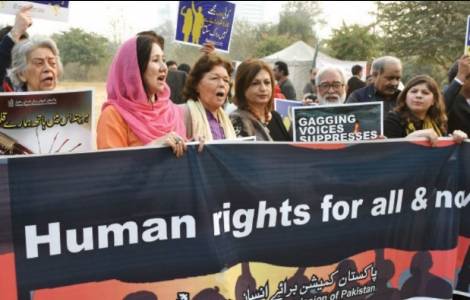 Islamabad (Agenzia Fides) - The Supreme Court of Pakistan has granted bail to three Christians accused of blasphemy, in two separate proceedings whose hearings have been held in recent days.
As Fides has learned, in the first case the judges granted bail to Salamat Mansha Masih who had been in prison for 18 months for crimes related to religion linked to the three articles of the Criminal Code that make up the so-called "blasphemy law" (295a, 295b and 295). Salamat Mansha worked as a garbage man, together with his colleague Haroon Ayub, at the Lahore Waste Management Company. The two were arrested after four Muslim students filed a complaint against them on charges of preaching Christianity and offending Islam. Haroon Ayub had been released on bail in February 2021 (see Fides, 17/2/2021).
The judges have now granted Salamat Mansha Masih bail. "I have never seen a case in which a Christian accused a Muslim of committing blasphemy. We should be grateful to our Christian brothers because they work at the service of our cities", said Judge Qazi Faez Isa.
In the second proceeding, two Christians, Patras Masih and Protestant Pastor Raja Waris, residents in Lahore, were released on bail on the advice of the High Court judges in a case defended by the lawyer Saif-ul-Malook (the Muslim lawyer who defended Asia Bibi). Patras Masih, now 22, was imprisoned for four and a half years on charges of making derogatory remarks against the Prophet Mohammed (article 295c of the Criminal Code). Patras was accused in February 2018 of posting a photo on Facebook that was considered a blasphemous post. Protestant pastor Raja Waris was jailed for 20 months on blasphemy charges, also accused of posting on Facebook. The man deleted the allegedly offensive post, but the charges against him and his arrest remained.
Joseph Jansen, president of the NGO "Voice for Justice", a well-known human rights activist, welcoming the decision of the Supreme Court, tells Fides: "We thank the judges for granting bail to the three Christians, but we still have serious concerns about the misuse of blasphemy laws, used to target innocent people". "Also noteworthy are the remarks of Judge Qazi Faez Isa who spoke out against discrimination and injustice committed on the basis of blasphemy laws and tried to highlight the issue of false accusations", he notes
For his part, Ashiknaz Khokhar, a Christian and human rights activist, assures that "the three are free for now, but it has been a terrible moment for them." "The procedure has not yet concluded. We want the Government and the Supreme Court to also work for their protection and to guarantee justice to all citizens, of any religion", he points out.
According to the National Commission for Justice and Peace (NCJP) of the Catholic bishops of Pakistan, there are six Christians accused of blasphemy who were granted bail in 2022. According to data from the Center for Social Justice, they are 1,949 people charged under the blasphemy laws from 1987 to 2021. This number includes 928 Muslims, 643 Ahmadis, 281 Christians, 42 Hindus and 55 of unknown faith. (AG/PA) (Agenzia Fides, 1/9/2022)

ASIA/MALAYSIA - Christians contribute to a "stronger and more united" nation