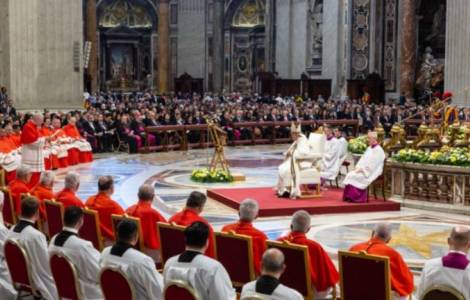 Vatican City (Agenzia Fides) - During Odinary Consistory, presided over by Pope Francis on August 27 for the canonization of Blesseds Giovanni Battista Scalabrini, Bishop of Piacenza, founder of the Congregation of the Missionaries of St. Charles and of the Congregation of the Missionary Sisters of St. Charles Borromeo, and Artemide Zatti, of the Salesian Society of St. John Bosco (Salesians), the Pope decreed that the two Blesseds will be included in the list of Saints on Sunday, October 9, 2022.
"The announcement of the date of the canonization of our founder Giovanni Battista Scalabrini fills us Scalabrinian Missionary Sisters with joy", said Sister Neusa de Fatima Mariano, Superior General of the Missionary Sisters of St. Charles Borromeo/Scalabrini, in a note sent to Fides. "This period will be a joyful journey to the day when he will be proclaimed Saint. He, the father of migrants, is the testimony of a Christian commitment to protecting the last, a voice that is as necessary and relevant today as ever". "The whole Congregation - underlines the nun – is living this moment in communion with the entire Scalabrinian family, with all migrants and refugees, aware that the legacy of Blessed Scalabrini is the mission among migrants, a charism for today. Scalabrini is soon to be a saint and his path of holiness was for and with migrants".
The Superior General of the Scalabrini Missionaries, Fr. Leonir Chiarello, shortly after the announcement of the canonization of Blessed John Baptist Scalabrini (1839-1905) in an interview with Fides (see Fides, 20/6/2022 ), had underlined: "With this recognition, the Holy Father points out to the Church the figure of a Bishop who was able not only to devote himself completely to his ministry in the diocese, but also to look beyond, to the needs of those who were torn from their land, to find hope elsewhere. The Church had already shared with Pius X Scalabrini the concern for the migrants, but with this canonization the Holy Father wants to emphasize even more the importance of this pastoral concern, about which he has expressed himself on numerous occasions".
Blessed Artemide Zatti, (October 12, 1880, Boretto, Italy - March 15, 1951, Viedma, Argentina), who was a lay member of the Society of St. John Bosco, will be the first collaborator of the Salesians of Don Bosco - consecrated, but not a priest - to be proclaimed a saint (see Fides, 13/4/2022). In early 1897, the Zatti family emigrated to Argentina and settled in Bahìa Blanca. The young Artemide began to attend the community led by the Salesians of Don Bosco. At the age of 20 he entered the Salesian aspirantate of Bernal. He also contracted the disease while helping a young priest who was suffering from tuberculosis. He was then transferred to the Mission Hospital in Viedma, run by Father Evarisio Garrone. Along with him, Artemide asked and received from Mary the grace of healing, combined with the promise to devote his whole life to caring for the sick. After his recovery, he kept his promise. In 1908 he took his vows. As a pharmacist and nurse, he dedicated himself to the sick. For the hospital staff, he was not only an excellent manager, but above all a great Christian. (SL) (Agenzia Fides, 29/8/2022)

EUROPE/ITALY - Scalabrini: "The image of a saint who knew how to understand and help, can maintain the hope of migrants and refugees"