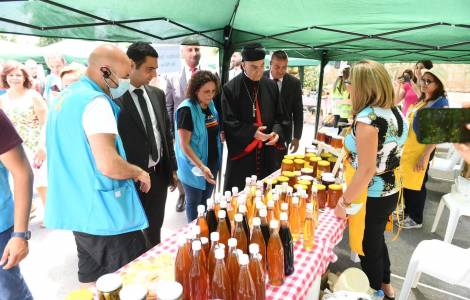 Rayfoun (Agenzia Fides) - A singular "alliance" between young Christians from Lebanese parishes and small agricultural producers from the Land of Cedars is trying to provide a concrete response to the economic emergencies that grip the daily life of the inhabitants of Lebanon. On Saturday, July 23, the first weekly community market of agricultural products was inaugurated in the town of Rayfoun. This is an initiative implemented within the framework of the programs initiated by the Center for the Integral Development of the Maronite Patriarchate. The stalls for the direct sale of agricultural products were set up in the space in front of the convent of Saints Sergius and Bacchus, which became the headquarters of the Patriarchal Center for Integral Development. The Maronite Patriarch Bechara Boutros Raï also attended the inaugural event, as well as politicians and representatives of Lebanese institutions, including the Minister of Social Policies Hector al Hajjar. After the inauguration of the Reyfun market, seven more weekly farmers' markets will be launched in the coming months in different parts of the country. In the "network" of weekly farmers' markets, the project called "Community Farmers Market" launched by the Patriarchal Center for Integral Development last December is being carried out. This initiative involved 150 boys and girls from the network of Lebanese parishes, as well as 120 local Christian and Muslim farmers and producers (see Fides 21/12/2021). In December 2021, the first stage of the project was completed. It consisted of several training courses, in which young people from the parishes and farmers took part, on the techniques of packaging and marketing the products and on the systems for creating small local markets to be established in the villages and neighborhoods of the large cities. The project aims to ensure that, through the network of small weekly markets, agricultural products, grown using techniques that guarantee high quality and organic certification, can be sold at sustainable prices following the marketing channels "from the producer to the consumer". During the inauguration of the weekly market in Rayfoun, the Maronite priest Rouphael Zgheib, Director of the Patriarchal Center for Integral Development, exposed the ideal and material motivations of the initiative: to respond to the cry of the earth by responding to the cry of the poor; promote environmentally sustainable production processes; support environmental education; and contribute to the spontaneous resilience strategies implemented by the Lebanese population to deal with the traumatic economic crisis that is strangling the Land of Cedars. During the inauguration on Saturday, July 23, the Director General of the Ministry of Agriculture, engineer Louis Lahoud, promised the support of government institutions for the program to extend the network of small weekly farmers' markets which will be implemented in all regions of the country. The project also aims to support the economic viability of many Lebanese families, trying to stem, at least partially, the migratory flow of many young people who leave their country to seek better living conditions abroad. The project was also realized thanks to the contribution of the Polish government. During the inauguration, the Polish Ambassador to Lebanon, Przemyslaw Niesiolowski, recalled the reasons that unite Poland and Lebanon in a bond of mutual solidarity, hoping that the network of farmers' markets which will be extended to the whole country will also contribute to mitigating the impact on national consumption of the war in Ukraine and the severe drought which is jeopardizing local agricultural production. "The bet on which we have bet, explained Father Zgheib in an interview with Agenzia Fides, is that of creating work opportunities for young people and farmers, while countering the specter of the shortage of basic necessities that represents the most distressing level of the economic crisis that the country is going through". Priest Rouphael Zgheib, National Director of the Pontifical Mission Societies of Lebanon, was appointed Director of the Center for Integral Development and Coordinator of the youth ministry of the Maronite Patriarchate since last November. (GV) (Agenzia Fides, 28/7/2022)

AFRICA/ZIMBABWE - "The absence of war is not real peace. The country needs a real dialogue between the social and political partners"

AFRICA/CHAD - After clashes between shepherds and farmers: Bishop of Sarh calls for justice and solidarity with victims

ASIA/LEBANON - Young Christians and farmers united in the "Community market of agricultural producers", against the specter of the food crisis

AMERICA/BRAZIL - Repam: spaces for the solidarity market in 91% of the local Churches in the Amazon

ASIA/PHILIPPINES - The community of Bataan rejects the plan to activate the nuclear power plant: life is more important than cheap electricity