AMERICA/CANADA - The Pope to native peoples: Christ can heal even the "indelible pain" of your wounds 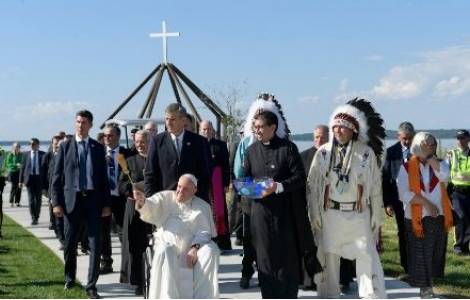 Edmonton (Agenzia Fides) - Faith rarely comes "from reading a book alone in a corner", instead, "it spreads within families, transmitted in the language of mothers, in the sweetly lyrical accents of grandmothers". The concrete lexicon of gestures and words that can give a foretaste of the Christian event today as an experience of healing, operated by Christ himself through the hearts of mothers and grandmothers who transmit the faith, give life and heal wounds. This is the "new beginning" suggested by Pope Francis to the native peoples of Canada, at the end of the third day of his apostolic visit in the great North American country: a return to the sources of their faith, re-proposed during the liturgy of the word celebrated in the context of traditional indigenous pilgrimage that takes place at the end of July at Lac S.te Anne, on the occasion of the liturgical feast of Saint Anne, mother of the Virgin Mary and the grandmother of Jesus. In the evocative setting offered by the spectacle of indigenous popular devotion, the Bishop of Rome expressed his moving astonishment in front of the "choral heartbeat of a pilgrim people, of generations who set out on a journey towards the Lord in order to experience his work of healing. How many hearts", the Pope remarked "have come here with anxious longing, weighed down by life’s burdens, and found by these waters consolation and strength to carry on". Drawing from the same treasure of grace - suggested the Successor of Peter - the native peoples of Canada can ask for the healing of the wounds caused by the "terrible effects of colonization, the indelible pain of so many families, grandparents and children". A path of healing that requires "effort, care and concrete actions on our part, but we also know that we cannot do this alone". The miracle of healing performed by Christ has as its paradigm the healings performed by Jesus in the Gospels. The Pope, in his speech, made a suggestive link between the Lake of Saint Anne and the Lake of Galilee, where Jesus carried out much of his ministry: "There he chose and called the Apostles, preached the Beatitudes, taught many of his parables, performed signs and healings. That lake, the heart of “Galilee of the Gentiles” was nonetheless a peripheral area, a crossroads of commerce where various peoples converged, making the region one of different religions and customs. Geographically and culturally, it was the farthest place from the religious purity concentrated in Jerusalem, around the Temple". Christ himself - the Pope noted - addressed his announcement and preached the kingdom of God "not to a select religious congregation, but to various peoples who then, as today, flocked from different places", to heal "the paralyzed, the blind and lepers, but also the broken-hearted and discouraged, the lost and hurting". In the same way, the Pontiff continued - "Jesus came then, and he still comes now, to care for us, and to console and heal our lonely and wearied human family", since even today "all of us need the healing that comes from Jesus, the physician of souls and bodies".
Throughout history - Pope Francis emphasized - it is above all mothers and grandmothers who provide the healing power of Christ's grace: "your hearts" the Pope said, addressing the many elderly women who went to the lake of Saint Anne on pilgrimage "are sources from which the living water of faith emerges, with which they have quenched the thirst of children and grandchildren". It is the mothers and grandmothers who "help heal the wounds of the heart." And that female primacy also has powerful and suggestive parallels in the history of the proclamation of the Gospel to Native American peoples. "At the dramatic time of the conquest", the Pope recalled, "Our Lady of Guadalupe transmitted the true faith to the indigenous people, speaking their own language and clothed in their own garments, without violence or imposition. Shortly afterwards, with the arrival of printing, the first grammar books and catechisms were produced in indigenous languages. How much good was done in this regard by those missionaries who, as authentic evangelizers, preserved indigenous languages and cultures in many parts of the world! In Canada, this "maternal inculturation" took place through Saint Anne, combining the beauty of indigenous traditions and faith, and fashioning them with the wisdom of a grandmother, who is a mother twice over". In the historical story of Christianity in the world - continued the Pope - there has never been a time in which the faith was not passed on in mother tongues, passed on by mothers and grandmothers". The painful legacy we are now confronting stems from the fact that indigenous grandmothers were prevented from passing on the faith in their own language and culture. This loss - added the Pontiff - was certainly tragic, but the very presence of grandmothers and indigenous mothers was a testimony of resilience and a fresh start, of pilgrimage towards healing, of a heart open to God who heals the life of communities". A restart that can flourish only from grace and that must be constantly implored for every step of the Church's journey through history: "all of us, as Church - the Pope remarked - need healing: healing from the temptation of closing in on ourselves, of defending the institution rather than seeking the truth, of preferring worldly power to serving the Gospel. And only with the help of God will it be possible to flourish "a mother Church as He wants: capable of embracing each son and daughter; open to everyone and that speaks to everyone, that does not go against anyone, but goes to meet everyone". (GV) (Agenzia Fides, 27/7/2022)