EUROPE/UKRAINE - The "StopthewarNow" caravan: "To be here with the people who suffer to dare to propose peace" 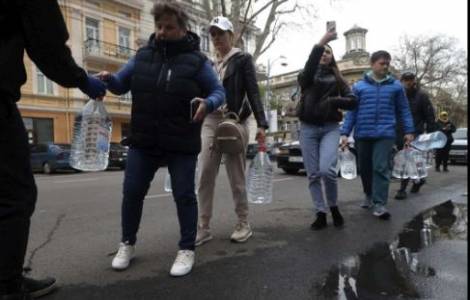 2022-11-30
Redemptorists: still "no contact" with the two priests arrested in Berdyansk

2022-06-30
The "StopthewarNow" caravan: "To be here with the people who suffer to dare to propose peace"

2022-06-28
The commitment of Christian, Catholic and Orthodox religious: pray for peace and make peace

Mykolaiv (Agenzia Fides) - Irina comes from Mariupol. She fled shortly before the final attack on the steel mill: "We miraculously escaped one day before our house was destroyed." It is one of the testimonies collected by Agenzia Fides in a car showroom in Odessa that its owner, Yuri, has transformed into a temporary collection center. So far the Caravan of Peace "StoptheWarNow" has brought part of the humanitarian aid organized and delivered by this network that brings together 176 associations. After its visit to Lviv in April, the organization returned to Ukraine between June 24 and 29. It was first in Odessa and the next day, June 28, in Mykolaiv.
"These gestures are important. The local associations distribute the help we bring", explains to Fides Gianpiero Cofano, secretary of the Pope John XXIII Association and creator of "StoptheWarNow". The caravan arrived in Ukraine with about ten vehicles, fifty people and forty tons of aid. The balance of this second trip of the Caravan of Peace is positive: "We come because the Ukrainians appreciate our physical presence which, among other things, has also allowed us to directly follow part of the aid distribution. Our humble packages are a relief to hundreds of people who stand in long lines to receive them. Through a food package we also deliver our message of peace and friendship". Cofano tells it from Mykolaiv, 130 kilometers from Odessa where the Caravan went despite the fact that the same morning of June 28 there was a bombing with victims. The convoy also included Msgr. Francesco Savino, vice-president of the Italian Bishops' Conference: "Here in Mykolaiv, war can be seen in all its forms. It is a completely militarized territory, but the meaning of being here is precisely to say that we must not surrender to the logic of war. We must not surrender to the thunder of the guns, to the 11 missiles that hit the city and its surroundings this morning. We are here to tell the Ukrainians that we are here, that we are here with them to share their pain, that we are on their side, but at the same time we want to dare to promote peace", explains the bishop to Fides. "We have heard many Ukrainian brothers speak of armed resistance and it is an attitude that can also be understood, but we must not give in to what apparently seems to be the only possible reaction. We must work and reflect on paths of peace that start from active and passive non-violence. Can war be counteracted with non-violence? Can war be countered with non-violence? It is a reflection that must engage us in the coming weeks, in the coming months and also in the coming years. We must return to non-violent conscientious objection against everything that is injustice, corruption, whatever goes against the development of man. Jesus still tells us today: Blessed are the builders of peace", concludes the prelate. Father Tonio Dell'Olio, one of the coordinators of the Caravan, explains that "reaching Mykolaiv 15 kilometers from the front line could not be taken for granted, so achieving it has been very important." "It has been an effort highlighted by the civil authorities of the city, such as the councilor of Mykolaiv, Maxim Kovalenko, who told us that yes, a lot of help arrives from abroad, but that nobody comes to see them. This is the added value that underlines the importance of what we are trying to do, which is to put our bodies into it and shake hands with people.
We saw them in line among those who were looking for drinking water and food, people who were fine before and are now in a situation that moves us to tears. I think it is important to live as witnesses of all this and that non-violence starts from here, from this fraternity that lives beyond our borders", concludes the priest. (EG/PA) (Agenzia Fides, 30/6/2022)

AFRICA/DR CONGO - National mourning for the massacre in a village in the east of the country; Sunday march for peace convened by the Bishops