ASIA/SOUTH KOREA - Peace and reconciliation in Korea and Ukraine 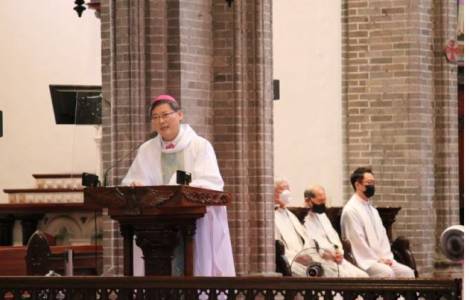 2020-06-30
Resignation of bishop of Tarawa and Nauru, Kiribati and Nauru, and appointment of successor

2020-01-25
Week of prayer for Christian unity: the Council of the traditional Kazakh Church is born

2018-09-03
Bishops of Asia united: Forum for peace on the Korean peninsula

Seoul (Agenzia Fides) - "Although conflicts, wars, hostilities and divisions in the world are constantly intensifying, the Church cannot turn away or renounce her mission for peace, harmony and unity on this planet. As Catholic Church in Korea, we must sincerely pray with all our hearts for reconciliation and unity between the two Koreas, as well as for an end to the tragic war in Ukraine", said Archbishop Peter Chung, Archbishop of Seoul and Apostolic Administrator of Pyongyang, presiding over the solemn Mass for Peace and Reconciliation held on June 25 at Myeongdong Cathedral in Seoul, on the occasion of the 72nd anniversary of the outbreak of war from Korea. The Mass, concelebrated by Bishop Thomas Aquinas Choi Chang Hoa, former president of the National Reconciliation Committee, was attended by priests, nuns and hundreds of Catholics who prayed intensely for peace.
The Catholic Church in South Korea, committed to the mission of becoming an effective instrument for the reconciliation and unity of the Korean people, annually sends its faithful to participate in the Day of Prayer for National Reconciliation and Unification, proclaimed by the Korean Episcopal Conference, set for the anniversary of the war, whose wounds are still felt today. "The South Korean and North Korean governments must find alternative ways of peace for the Korean Peninsula: strengthening military power will never be the right option. Let us join our hearts to achieve love, forgiveness and true peace that Christ has shown us. Let us pray together that the day will come when peace between the Korean people and for all humanity can be achieved, through the intercession of Our Lady", said the Archbishop in his homily. Religious and faithful pray fervently for reconciliation and peace on the Korean Peninsula. The Korean Church launched a prayer campaign with the following slogan: "As long as we remember them, they are alive". As long as we pray for them, the prayer will be answered", referring to Catholic faithful hiding in North Korea, where the faith can be lived in secret and at great personal risk. As a note from the Archdiocese of Seoul reports to Fides, the Mass - one of the spiritual activities for the special Day - was organized by the Committee for National Reconciliation of the Archdiocese of Seoul, created on 1 March 1995 by Cardinal Stephen Kim Sou-hwan, to promote reconciliation and peace between South Korea and North Korea. For the past 27 years, the Committee has organized and celebrated a Mass reciting the prayer attributed to St. Francis of Assisi “Lord, make me an instrument of your peace” every Tuesday at 7:00 p.m. in Myeongdong Cathedral. The Committee also carried out various concrete initiatives of humanitarian aid to the population of North Korea, offered aid to North Korean refugees who came to South Korea, and organized courses, initiatives and activities for peace education and research on peace, often aimed at young people. (PA) (Agenzia Fides, 28/6/2022)

AMERICA/COLOMBIA - The President of Celam: "huge amounts of money for the war instead of investing in combating the causes of the conflicts"