EUROPE/UKRAINE - The commitment of Christian, Catholic and Orthodox religious: pray for peace and make peace 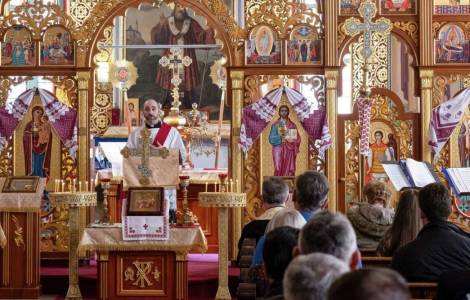 2022-06-30
The "StopthewarNow" caravan: "To be here with the people who suffer to dare to propose peace"

2022-06-28
The commitment of Christian, Catholic and Orthodox religious: pray for peace and make peace

Odessa (Agenzia Fides) - The Peace Caravan which left Italy two days ago to show its closeness and solidarity with the victims of the Ukrainian war and to bring them material aid collected by the 176 associations recognized in the StoptheWarNow coalition arrived this morning in Mykolaiv, a martyr city north of Odessa. It is a reduced convoy for security reasons, led by the coordinators of these days at the heart of the conflict, Gianpiero Cofano and Tonio Dell'Olio. The envoy of the Italian Episcopal Conference (CEI), Bishop Francesco Savino, is also traveling with them in the car that drives the mini-column. Yesterday, June 27, the "StoptheWarNow" peace caravan, which arrived in Odessa after a two-day trip, met with local clergy. Illustrating in a public meeting, under the banner of ecumenism, the content of the second mission to Ukraine of the network of Italian associations, the president of the "Pro Civitate Christiana of Assisi", Don Tonio Dell'Olio, coordinated the interventions respectively by Alberto Capannini (Community of Pope John XXIII, local coordinator), Stanislav Šyrokoradjuk (Latin bishop of Odessa), Mychajlo Bubnij (Greek-Catholic bishop of Odessa), Afanasiy (Ukrainian-Orthodox bishop), Francesco Savino ( vice-president of the CEI), Father Mykola Slobodyan, Don Roman Krat and Oksana Ukraiinska (Caritas - Spes). Bishop Savino recalled the importance of diplomacy, precisely because wars, he said, "are also the death of politics and diplomacy". From wars "no one is victorious", he said, then recalling the Pope's words and inviting us to "pray for peace and make peace", as the participants in the convoy are doing, "animated by people with different sensitivities but all imbued with the same dream of peace". The extensive caravan movement is therefore telling Europe and the world "that war must end: war is never the solution but only destruction, despair, death". In conclusion, the representative of the Italian Episcopal Conference asked: "What is the world that we are going to pass on to your children? We are not here only to give help, although the Church will always be ready to make donations. We are also here to say that non-violence is the only way to resolve conflicts". Bishop Savino also brought greetings and encouragement from the Vatican Secretary of State, Cardinal Pietro Parolin, whom he met on the eve of his departure. The discussion was frank, as were the interventions of the various Ukrainian ecclesiastics who did not fail to underline the atrocities committed during the conflict, the tragedy of the displaced persons, the violence perpetrated on the very bodies of children. "Official estimates speak of 5,000 civilian deaths, but we know that there are many more," said Greek-Catholic Bishop of Odessa Mychajlo Bubnije. The Prelate added an appeal: "Do not get used to this war". Ukrainian clerics are calling for greater commitment to peace, especially from Europe which, Father Roman Krat noted, "often just says it's concerned". (EG/PA) (Agenzia Fides, 28/6/2022)

EUROPE/RUSSIA - "Ecumenism of blood". In Moscow the memory of martyrs unites Christians of different confessions