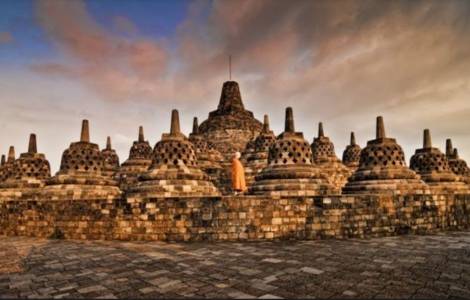 2022-08-04
Contemplative charism in Indonesia: a Trappist monastery under construction on the island of Borneo

2022-07-29
Wrong teaching on the Christian faith: after the intervention of the Bishops, the government announces the correction

2022-07-19
In Flores, the vocational 'little Vatican', the pandemic does not stop vocational growth

2022-07-14
Catholic religious: justice for the murder of a young Indonesian immigrant

Jakarta (Agenzia Fides) - Civil society and the different religious communities, Buddhists, Muslims and Christians, have expressed their disappointment and disagreement with the government's plan to charge an expensive entrance fee to visit the temple of Borobudur, the largest Buddhist place of worship in the world, located in the regency of Magelang, central Java. The Indonesian Buddhist Society (Walubi), through its spokesperson Ruslin Tan, has expressed serious concern to Buddhist faithful and locals about the potential decrease in the number of tourists and pilgrims visiting the famous Buddhist temple, noting that any place of worship, regardless of religion, must by nature be open to all. Borobudur Temple is an ancient place of worship which, due to its unique historical character, has also become one of the busiest tourist sites in Indonesia, but continues to host impressive Buddhist religious gatherings and pilgrimages. While until now, it could be visited for a small fee (between 25,000 and 50,000 Indonesian rupees), accessible to all, the government has announced that it wishes to radically modify the entrance fee. The new entrance fee will be 750 Indonesian rupees (approximately US$50) per person. This amount is very high for most Indonesians, considering that the salary of a low-income worker is around 2 million rupiah (138 USD). Indonesian Buddhist monk Sri Pannyavaro Mahathera remarked, "So many poor people will no longer be able to visit the temple, it would be a great loss. The government's announcement sparked public outcry, although Luhut Binsar Pandjaitan, Minister of Maritime Affairs and Foreign Investment, justified the move on the grounds of "preserving the environmental safety of the world's largest Buddhist temple". The authorities would like to reduce the number of daily visitors to 1,200 people, he said, while requiring the presence of a special tourist guide. Borobudur Temple was founded in the 9th century by the Syailendra dynasty of the Buddhist kingdom based in Central Java. The building merges the Indonesian tradition of ancestor worship with the Buddhist concept of the journey to "Nirvana". The temple consists of nine stacked platforms, six square and three circular, surmounted by a central dome. It is decorated with 2,672 relief panels and originally had 504 Buddha statues. The central dome is surrounded by 72 Buddha statues, each seated inside a perforated stupa. (MH/PA) (Agenzia Fides, 15/6/2022)

AFRICA/ESWATINI - The Bishop: “The road to dialogue is marked by uncertainty”

AMERICA/COLOMBIA - Faced with the escalation of violence in Apartadó: prayers for peace and reconciliation, symbolic acts of rejection