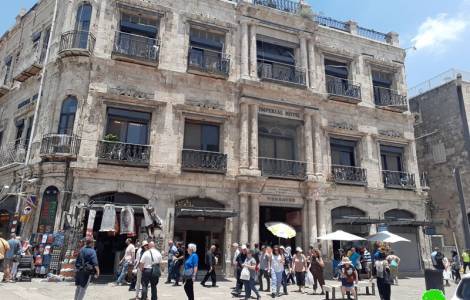 Jerusalem (Agenzia Fides) - The Supreme Court of Israel has definitively put an end to the long legal battle waged by the Greek Orthodox Patriarchate of Jerusalem to annul the acquisition, by the radical Jewish organization Ateret Cohanim, of three prestigious properties located in the Old City of Jerusalem, properties that once belonged to the Patriarchate and are located in the Old City of Jerusalem. The corresponding ruling by Israel's highest judicial body, which took place on Wednesday, June 8, confirmed the sentence previously handed down by a lower court, which had already ruled on the inconsistency of the evidence and the legal arguments based on the legal action brought by the Greek Orthodox Patriarchate Judges Daphne Barak Erez, David Mintz and Shaul Shohat - Israeli media reported - have ruled that they have found "no error" in the previous sentence issued by the Jerusalem District Court, which in 2020 had rejected a request from the Greek Orthodox Patriarchate to reopen the case on the basis of new evidence showing - in the opinion of the Patriarchate's delegates - the "criminal behavior, including extortion and fraud" carried out by Ateret Cohanim to take possession of the properties in dispute . The Ateret Cohanim organization has been repeatedly involved in controversial property acquisitions in East Jerusalem in recent decades, especially in the Christian quarter of the Old City. "We are talking", Asaad Mazawi, Lawyer of the Greek Orthodox Patriarchate, told international agencies, "of a group of extremists who want to steal property from the Churches, want to change the character of the Old City and want to invade Christian areas". In a statement issued after the Supreme Court ruling, the Greek Orthodox Patriarchate of Jerusalem confirmed its intention to continue supporting Palestinian employees still inside the disputed properties, recalling the urgency of countering the "political and agenda Israeli far-right racist". According to Israeli media reports, Ateret Cohanim is preparing to evict tenants from disputed properties. Two of the three buildings in question, the “Petra” Hotel and the “Imperial” Hotel, are located near the Jaffa Gate, considered the most direct entrance to the Christian quarter of the Old City of Jerusalem. The third property, also located in the Christian quarter, is known as "Muzamiya House". The sale of the three properties, as reported by Fides (see Fides, 26/6/2020), took place in 2004, and the news of the sale had caused protests and discontent within the Greek Orthodox Christian community, culminating in the deposition of the Patriarch Irenaeus I by the Holy Synod on charges of improper alienation of properties belonging to the Patriarchate.
In August 2017, the Jerusalem District Court had rejected legal attempts by the Greek Orthodox Patriarchate of Jerusalem to have the acquisition of some of its properties by the Jewish organization Ateret Cohanim recognized as “illegal” and “without authorization”. After that sentence, the Patriarchs and Heads of the Churches of Jerusalem signed a joint document (see Fides 5/9/2017) in which they denounced "a systematic attempt to undermine the integrity of the Holy City" and "to weaken the Christian presence in the Holy Land". A project that, according to the heads of the Churches, was clearly manifested in the "violations of the Status Quo" of the Holy Places. In the joint document, also signed by Theophilos III, Greek Orthodox Patriarch of Jerusalem, and by Archbishop Pierbattista Pizzaballa, Apostolic Administrator of the Latin Patriarchate of Jerusalem, a firm opposition was expressed to "any action" launched by "any authority or group ” that seeks to violate and undermine the “laws, agreements and regulations that have governed our lives for centuries”. The Orthodox Patriarchate of Jerusalem appealed against the 2017 ruling to the Israeli Supreme Court, which on June 10, 2019 confirmed the regularity of the transfer of the properties, legitimately purchased by foreign intermediaries acting on behalf of Ateret Cohanim. Then, in December 2019, the legal dispute was reopened, after a Jerusalem District Court judge challenged the previous Supreme Court ruling, effectively opening the possibility of starting a new trial on the controversial issue. Now, the umpteenth pronouncement of the Israeli Supreme Court seems to mark the definitive end of the fight around the disputed buildings of of the Old City of Jerusalem. (GV) (Agenzia Fides, 10/6/2022)

ASIA/HOLY LAND - Patriarch Pizzaballa: this is what Charles del Foucauld tells us, the Saint who "did nothing"