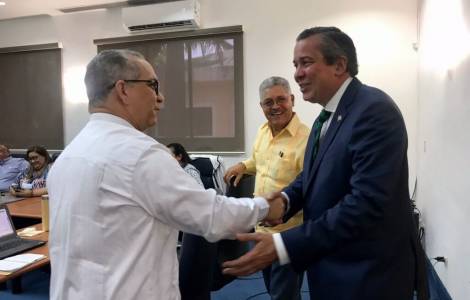 2022-07-27
On August 15, the closing celebrations of the Altagracian Jubilee Year

2022-07-18
The Virgin of Altagracia, "source of unity in difficult times, a sure hand that supports in setbacks"

2022-05-25
The Minister of the Environment to the Pastoral Commission for Ecology: working together to defend the common home

2022-02-26
The Bishops on the occasion of Independence Day: "Let the truth come out for the good of the nation"

2022-01-20
The Bishops: "St. Joseph supports us in our daily struggles, no one like him knew how to go through difficult times"

Santo Domingo (Agenzia Fides) - The value of the work carried out by the Church and the importance of joining forces to protect our common home, as urged by Pope Francis, were highlighted during the recent meeting of the Minister of the Environment of the Dominican Republic, Orlando Jorge Mera, with the National Commission for Ecological and Environmental Pastoral Care, of the Dominican Episcopal Conference (CED), meeting at the CED headquarters. "The Catholic Church has a great particularity, there is no better administrator than a priest and people linked to the Church", said the minister, in the note sent to Fides by the CED -. "For me it is important to maintain a cordial and respectful relationship with this Pastoral care, we are available for any situation in which we can intervene ... Our common home is the Dominican Republic, therefore, we must work hard to protect and defend it together, we must think about our children, grandchildren and those who will come after them". At the meeting of the Commission, chaired by Monsignor Héctor Rafael Rodríguez Rodríguez, Bishop of La Vega, the diocesan delegates, internal and external environmental consultants shared various problems and initiatives of their respective dioceses, as reported by Jovanny Kranwinkel, executive secretary of the National Commission, who also underlined that the seventh anniversary of the encyclical Laudato Sì is being celebrated. Biologist Luis Carvajal, coordinator of the Environmental Commission of the Autonomous University of Santo Domingo (UASD), member of the Academy of Sciences and advisor to the Pastoral, also participated in the meeting, who warned about the number of mining concessions that exist and the danger they represent, highlighting the role that the Church can play in education, accompaniment and demand for respect for environmental laws. Other guests also took part. Father Ricardo de la Rosa, delegate of the Episcopal Territorial Vicariate of Santo Domingo Este, highlighted the importance of integrating the community in environmental projects: "we must involve the different movements and communities, since they are the ones who they know the reality of their environment". (SL) (Agenzia Fides, 25/5/2022)

AMERICA/ARGENTINA - "Listening and walking together": opening of the Laudato Sì week 2022