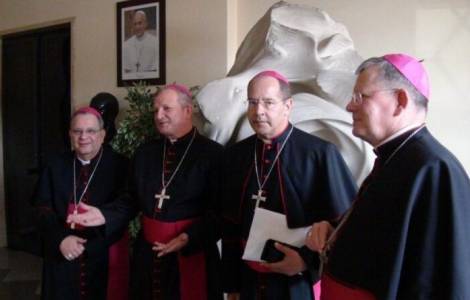 2022-06-23
The Bishops: "let's raise our voices again to denounce violence and cry out together for peace"

2022-06-10
IV Meeting in Santarém: "Continue sowing the Gospel and the signs of the Kingdom in our Beloved Amazon"

Brasilia (Agenzia Fides) - The serious health crisis caused by the Covid 19 pandemic "has also plunged our country into a complex and systemic ethical, economic, social and political crisis, which had already challenged us well before the pandemic, causing structural inequalities to explode that are ingrained in Brazilian society", write the Bishops of Brazil in their message sent at the end of the first phase, held in virtual form from April 25 to 29, of their 59th General Assembly.
"The current situation is very serious. Brazil is not doing well", the bishops denounce, recalling the hunger and food insecurity in the country, which is the "second largest food exporter in the world", the high unemployment and informal work, the exploitation and destruction of the common home, the lack of respect for the rights of peoples indigenous people, the persecution and criminalization of socio-environmental leaders, "the weaknesses of measures to combat environment and disastrous parliamentary projects against the common home". All of this leads to "a latent, explicit and growing violence in our society", in a climate "of tension and violence in which we live, in the countryside and in the cities". "The liberalization and promotion of mining in indigenous and other areas, the flexibility of gun ownership and carrying, the legalization of gambling, the increase in femicide and the marginalization of the poor do not contribute to the civilization of love and violate universal brotherhood".
The Bishops therefore hope that, in the face of this scenario, those in power "promote great and urgent changes, in accordance with the principles and values of the 1988 Constitution". They demand that "the loss of the rights of workers and the poor, who form the majority of the Brazilian people, must not be allowed" and warn against a logic of confrontation "that threatens the democratic constitutional state and its institutions and turns opponents into enemies ". It is in this context of "uncertainty and radicalism" that we will vote this year, says the message, which emphasizes that the election "will determine the national project that we want" and calls for "the exercise of citizenship, with a conscious political participation, capable of promoting 'good politics', as Pope Francis tells us". In the face of "attempts to break the institutional order that are openly propagated today", the bishops warn that "disrupting the political process, fomenting chaos and encouraging authoritarian action are absolutely not in the interests of the Brazilian people", and warn of two particular dangers in doing so: religious manipulation, practiced by both some politicians and some religious, and endangering the spread of fake news by Brazilian democracy. The bishops therefore invite all Brazilian society "to take part in the elections and to vote with conscience and responsibility", electing candidates "promoting the integral protection of life in all its phases, without neglecting the human and social rights and our common home". "All Christians are called to work to build a better world through dialogue and a culture of encounter in the struggle for justice and peace," they stress. Finally, the bishops appreciate the numerous gestures of solidarity by the various Brazilian communities on the occasion of the pandemic and natural disasters, and called on them to continue on this path, in a common commitment to life, to the country, to home and to work, "to break away from hope and to be guided by the desire for a just and fraternal society". (SL) (Agenzia Fides, 30/4/2022)

AMERICA/COLOMBIA - Fire in the Tuluá prison: the authorities called to "watch over and accompany the life and social reintegration of detainees"

AMERICA/PERU - The Bishops to the President and parliamentarians: "Assume your responsibility for which you were elected!"

AMERICA - The Bishops of Paraguay, Colombia and Venezuela gather for their Plenary Assembly: Synodality at the center