EUROPE/GERMANY - Star Singers Campaign 2022: health is a right for everyone, including the children of Africa 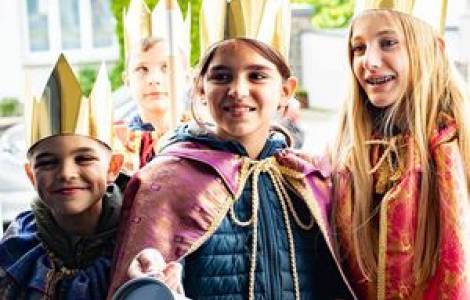 2022-07-16
Ukrainian refugees guests at the Redemptorist monastery in Bonn: "a unique and new experience"

2020-12-21
Star Singers: "the faithful still want their Christmas blessing" even in times of pandemic

2020-09-24
Towards World Mission Day: "in times of coronavirus, solidarity is more important than ever"

Aachen (Agenzia Fides) - "Becoming healthy, staying healthy: a right for children all over the world", is the motto of the 64th Campaign of the "Star Singers" ("Die Sternisnger") with which the children of missionary childhood Germany want to raise awareness of the need for prevention and medical treatment for the children of Africa. In many countries of the so-called "global South", due to generally weak health systems, the health of children is constantly threatened. The Star Singers Campaign 2022 "focuses on a significant and current theme", explains the National Director of the Pontifical Mission Societies (PMS) in Germany, Fr. Dirk Bingener.
"The ongoing pandemic proves once again that health is a precious good. The upcoming campaign teaches our Star Singers how children in Africa grow up in difficult health conditions. Although much progress has been made in the medical care of girls and boys around the world, half of the world population still does not have access to adequate health care today", explains Fr. Bingener, who is also responsible for Missionary Childhood in Germany.
Dressed in their costumes of Magi, with their Star and their songs during Christmas time and in the early days of the new year the "Star Singers" go around visiting German homes. The children from Catholic parishes in Germany carry the "C+M+ B" blessing ("Christus mansionem benedicat - Christ bless this house") to the families, collecting donations for other children their age who suffer throughout the world.
Since it started in 1959, the Star Singers Campaign (Aktion Dreikönigssingen) has grown into the largest solidarity campaign in the world by children for children. Since then, around € 1.23 billion has been raised and more than 76,500 children's projects have been supported in Africa, Latin America, Asia, Oceania and Eastern Europe that support children around the world in education, health, pastoral care, nutrition and social integration.
Due to the persistence of the pandemic, the Star Singers Campaign 2022 will be extended until February 2, to allow parishes and groups to carry out the campaign safely, even in difficult conditions. For the official opening of the 2022 Epiphany Campaign which takes place today, December 30, in Regensburg, following the health guidelines, the program and the number of participants have been reduced. A small delegation of the Star Singers will participate on Saturday, January 1, 2022 in the celebration for the World Day of Peace presided over by Pope Francis in St. Peter's Basilica in the Vatican. (MS) (Agenzia Fides, 30/12/2021)