ASIA/KIRGHIZISTAN - Apostolic Administrator: "A small church that tries to bear witness to the gospel by being close" 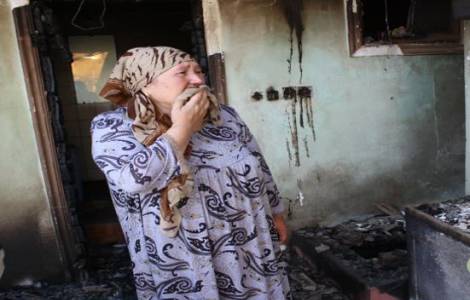 2021-12-02
Apostolic Administrator: "A small church that tries to bear witness to the gospel by being close"

2021-04-14
"God loves the little ones": Young woman receives the sacrament of baptism in the Kyrgyz Church

2021-01-14
Pastoral Letter for the new year: "Christ is faithful to his Church and offers great opportunities for grace, in the challenge of the pandemic"

2021-01-11
Elections and constitutional referendum: the country towards presidentialism with leader Japarov

2020-10-23
Political crisis resolved with centralization of powers: people's expectations have been disappointed

Bishkek (Agenzia Fides) - "Kyrgyzstan is a small country that is surrounded by very strong neighbors and is changing a lot: it has always been open to religious options. In general, we have the freedom to work as missionaries, even if it is in any case the place where, a few weeks ago, a young priest was sent away without any explanation. Every day we are confronted with two opposing approaches: on the one hand, the risk of being accused of proselytism and, on the other hand, the mistake of not evangelizing at all. The Church in Central Asia is often compared to a sprout. Reflecting on these words, I realized that there is no plant that does not give something, no matter how small: for example, plants that do not bear fruit, still offer shade or vice versa. In this area of the world, we are called to serve in such a small reality that it is almost unknown, but this does not mean that it cannot bear fruit", said to Fides Jesuit Fr. Anthony Corcoran, Apostolic Administrator of Kyrgyzstan.
Fr. Corcoran, who also spoke during the recent webinar "The mission of evangelization in Central Asia at the time of Evangelii Gaudium. Context, difficulties, perspectives", illustrated the reality in which the Kyrgyz Church is called to work: "The total population is about 6 million people, of whom 34% is made up of young people under the age of 15, therefore it is a very young country. 90% of the population is of Muslim faith, while about 8-10 % are Christians, with Catholics being a tiny minority".
In this context, the Jesuit explains, the preaching of the Gospel means above all to be with the people and to bear witness to the Gospel, especially to the poor, the suffering, the sick, the people in need or in despair: "Reflecting on what it means to be Catholic and to evangelize in a similar reality, we have understood how important it is to start from friendship and from the experience of the ministry of consolation: it is an inter-religious dimension, because Jesus does not only console us Christians, and also very practical, because it is something that cannot be rejected. When they find consolation, people recognize it and instinctively accept it, only then do they try to understand where it is from. This work is especially important for young people because when they reflect on the experience of closeness they can begin to wonder where the comfort comes from and thus discover Christ".
In Kyrgyzstan there are currently three Catholic parishes in the cities of Bishkek, Jalal-Abad and Talas, but many small parishes are spread across the country's rural areas. Local Catholics can count on the spiritual support of seven priests, one religious and five Franciscan Sisters. In 1997 Pope John Paul II established the Mission sui iuris, as was the case in the neighboring states of Central Asia. In 2006, Pope Benedict XVI elevated the circumscription to the rank of Apostolic Administration. (LF-PA) (Agenzia Fides, 2/12/2021)