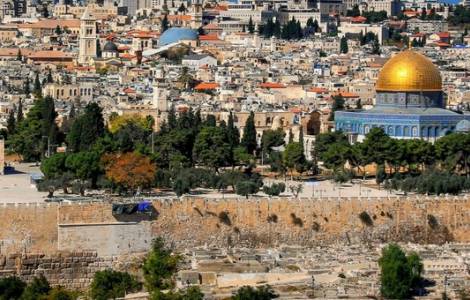 2021-12-04
Nazareth, thousands of people in the square for the lighting of the Christmas tree

2021-12-01
"Autochthonous and rooted in this land". The Assembly of Christian Associations in Palestine is born

2021-11-24
“Work is love made visible”. Women in Holy Land give life to the "interreligious" Christmas Market

2021-10-28
Jerusalem, Israeli authorities block the cultural festival organized in the House of Abraham. The Heads of the Catholic Churches express deep concern

Jerusalem (Agenzia Fides) - The thousands of families of the Holy Land - including Christians - who lived off the flourishing tourism industry around pilgrimages to the Holy Places before the pandemic, still cannot see the end of the tunnel. Since last September 19, the Israeli authorities have embarked on a timid reopening to foreign travelers, but the low number of arrivals and the harsh conditions imposed on aspiring pilgrims (despite the vaunted effectiveness of vaccination campaigns) continue to maintain all workers and operators of the sector in a state of suffering, penalizing in particular those who are based and offer their services in the Palestinian territories. A detailed dossier edited by Florence Budry and published on the official website of the Latin Patriarchate of Jerusalem describes in detail the many conditions that do not suggest any imminent and massive return of pilgrims wishing to go to the land of Jesus.
The measures taken by the Israeli authorities to reopen to tourism have had a setback effect. Already in May 2021, after the vaccination campaign, Israel timidly reopened its airports to the influx of pilgrims and foreign tourists.
Over the next three months, mainly due to the imposition of restrictive health protocols, the number of tourists disembarking in Israel with travel authorization was around two thousand, a figure incomparable by the millions of pilgrims visiting the Holy Land every year before the pandemic. At the end of August, a new suspension of authorizations, justified by the spread of the Delta variant virus, again paralyzed pilgrimages and all economic activities linked to the flow of pilgrims. Now, since September 19, the Israeli authorities have only allowed entry to groups participating in trips organized by local travel agencies authorized by the government. Groups of pilgrims must be made up of a minimum of 5 and a maximum of 30 people. Tour operators based in the Palestinian Territories, including Bethlehem, are still excluded from participating in this small resumption of tourist activities in the Holy Land.
Aspiring tourists and pilgrims, in addition to presenting the vaccination certificates received and declaring their willingness to undergo numerous rapid tests, must also have health insurance valid in Israel and the Palestinian Territories for the entire duration of the stay that also covers pathologies linked to Covid-19.
Regarding access to the Holy Places in Jerusalem, controversy and strong criticism continue on the ruling in which an Israeli court ruling at the beginning of October again recognized Jews the right to pray "in silence" in the courtyards of the Al-Aqsa mosque. The decision provoked the immediate objection by the Council for Islamic Endowments in Jerusalem. Sheikh Omar Al-Kiswani, director of the al Aqsa mosque, also warned against the triggering of a "religious war" due to "provocative prayers" and the attempt to "impose a new reality in the Al-Aqsa mosque". The Islamist movement Hamas, which controls the Gaza Strip, described the decision as an "attack on religion and sanctity" of the Holy City. Al Azhar, the leading theological center of Sunni Islam, also defined the Israeli court ruling as "a clear provocation for Muslims around the world". While the Patriarchs and Heads of Churches of the Holy Land, in a statement released on Monday, October 11, said that the ruling taken by the Israeli court "infringes the exclusive right of Muslims to their Holy Sanctuary", adding that "the Churches of Jerusalem are alongside their Muslim brothers and sisters, in the face of this injustice done to them ". (GV) (Agenzia Fides, 13/10/2021)

ASIA/PHILIPPINES - Preserving the beauty and the population of Boracay: "No" to the spread of gambling

ASIA/LAOS - Zero deaths from Covid-19, but a negative impact on economy and tourism

ASIA/HOLY LAND - Heads of the Churches of Jerusalem: at Christmas let us rejoice in God's gift for us, in these difficult times