AFRICA/SOUTH SUDAN - Message from the Bishops: do not derail the path towards peace 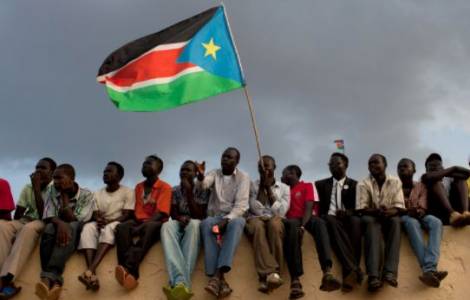 2021-10-01
Mission is what unites the different expressions of the Church: the bishop of Tombura-Yambio urges the protection of priests and religious

Juba (Agenzia Fides) - "We condemn unreservedly the murder that took place on August 16 of our dear Sisters of the Sacred Heart Mary Daniel Abbud and Regina Roba and their fellow travellers on the Juba-Nimule road. While we call for forgiveness and reconciliation, we also demand that the killers be identified and held to account. We reject the language of 'unknown gunmen'; the local community usually knows who the killers are, but they are allowed to escape with impunity". In a courageous and heartfelt message, the Catholic Bishops of South Sudan appeal to the political authorities to intervene in order to ensure justice and continue without delay the path towards peace that began with the signing of the 'Revitalized Accord' exactly three years ago. In the Letter published by the Bishops at the conclusion of the assembly held in Juba on September 14 and 15, and sent to Fides, it is stated: "We reject the attempts to use this tragedy to derail the peace process. Our country is supposedly at peace, yet many of our citizens face violence on a daily basis. At this very moment, people are being killed and displaced around Tombura and the rest of Western Equatoria, and elsewhere. People are living in fear in United Nations POC camps. We remind the government of their duty to provide security to the population, but we also urge them not simply to create more violence using the security apparatus". Representatives of the Christian faith have personally paid for their testimony of faith in South Sudan. The Bishops mention some of the latest violent attacks suffered by men, women and property of the Catholic Church. Among these, the Bishop of Rumbek, Msgr. Christian Carlassare, seriously injured in an ambush last April, Sister Veronika Racková killed in Yei in 2016, Juliano Ambrose Otwali killed last November, or the Kenyan Jesuit Father Victor Odhiambo, killed in Rumbek in 2018. The list also includes episodes of destruction of premises and notes the impossibility, for many missionaries, to carry out pastoral and social activities.
The Bishops also express their disappointment at the delays in fulfilling the obligations taken in the presence of the Pope in April 2019 when the political leaders made the commitment – sealed with the kiss of their feet on behalf of the Pope - to pursue peace. "The Pope's gesture touched us deeply, it was a real blessing. But we must note with sadness that this kiss clearly did not push them enough to commit themselves to manifest their real desire for peace: violence, ideed, is still present.
Let us pray that they find within themselves the strength to make the necessary decisions to bring peace to our suffering people". The letter reminds the government of its responsibilities to "create an economic environment capable of guaranteeing essential services" to citizens and also addresses the president: "We advise the President to work diligently to improve the economy, as he promised". Noting the lack of infrastructure, the expropriation of land, the contempt for human rights, the Prelates strongly call for a non-violent solution to the many problems following the precepts of Pope Francis' message on the occasion of the 2017 World Day of Peace: "Nonviolence: a style of politics for peace". The message notes that, in the face of the slow implementation of the Revitalized Accord, the Church is once again offering its contribution to the search for peace and justice, as it "wishes to be more involved in the peace process". In the document, the Church stands above all in defense of the rights of the population, affected by poverty, natural disasters and conflicts. Thus the text concludes: "We pray for all of you during these difficult times. We wish to encourage all our faithful and people of good will, especially our ecumenical and inter-faith sisters and brothers, to be strong in faith and hope and to continue working for peace and justice". (LA) (Agenzia Fides, 28/9/2021)

ASIA - Bishop Dell’Oro: "The new Bishops' Conference will benefit the mission of the Church in Central Asia"