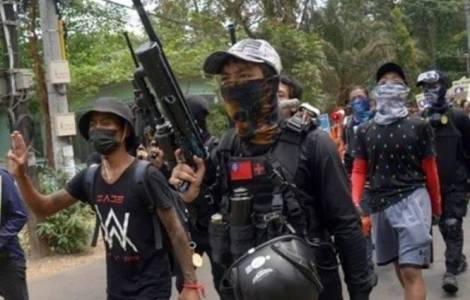 Yangon (Agenzia Fides) - In many regions of Myanmar the regular army is asking village authorities to recruit young people as military assistants, and to help the army in the logistics, especially in combat areas. If the village authorities refuse, the soldiers go to homes in search of the boys and kidnap them. "According to some, it is a tactic to use them as human shields in combat areas; others point out that, after the coup, the military academies, formerly full of young people, are empty, and the army needs new recruits", explains a local source of Fides in the Burmese Catholic community. "But the army carries out violence against civilians and does not have the trust of the population, much less of the young".
Young people instead choose to join the resistance and the People's Defense Forces, to fight the "defensive war" proclaimed by the National Unity Government (NUG) which opposes the military junta in power (see Fides, 7/9/2021). As sources of Fides note, many young people reacted positively to the announcement of the NUG and mobilized, joining the local militias. Michael Thang, a young Catholic, tells Fides: "I believe in justice and democracy. Rather than joining the Myanmar army, I will join the Popular Defense Forces that really defend the people". Another young man, Nerius Ri, notes: "The soldiers of Tatmadaw commit human rights violations every day; they cannot force us to fight alongside them. We will defend the innocent, freedom, the poor, the future of our country".
Sister Mary Nge, a Catholic nun from the Burmese state of Kachin, comments: "While the Myanmar military arrest, imprison and kill unarmed civilians, the NUG has the full moral support of the people of Myanmar, especially the youth. They see it as their hope for a future of peace, justice and democracy". Sister Ester Bawk, also in Kachin, notes to Fides that "young Christians, alongside all the others, of different culture, ethnicity and religious faith, are responding to the call of the NUG". Half of Myanmar's population is under the age of 30 and many of these young people have benefited from the fragile democratic transition that has taken place in the country over the past decade. "They know that their future is at stake now - say the nuns - human development, fundamental freedoms in the nation are at stake. They used the Internet and now they see limited freedom of speech. They do not want to give up rights, education, they want to build their future, in autonomy and freedom". At first, after the coup of February 1, young Burmese animated the "Movement of civil disobedience", activating a nonviolent resistance organized with sit-ins, peaceful street demonstrations, strikes, boycotts, even with creative actions, inviting the police and military forces to join the resistance. After the fierce repression of the army, bodies of the People's Defense Forces were formed all over the country and started an armed resistance, considered as "civilian combat for self-defense, necessary for survival". These resistance militias are made up mostly of young people.
In Myanmar, 85% of the population profess Theravada Buddhism (about 48 million people), 6% Christianity (1.6 million Baptists and 550,000 Catholics), 4% Islam (2.2 million), 1% Hinduism (550 thousand followers), while other minorities follow other movements of Buddhism (such as Mahayana) and animism. (JZ-PA) (Agenzia Fides, 9/9/2021)

ASIA/PAKISTAN - On the day dedicated to the Armed Forces, the Church pays homage to Christian war heroes

AMERICA/GUATEMALA - Increasing violence and conflict in the department of Solola, the Bishops call for dialogue and prayer

AFRICA/NIGERIA - Reconciliation with Boko Haram: for the Church a step in the right direction

AFRICA/MALAWI - Increase in the cost of living: for the "Justice and Peace" Commission, it is urgent "to listen to the cry of the people"

AFRICA/SOMALIA - Bishop Bertin: hope is the beginning of a process of dialogue and democratization