AMERICA/PANAMA - The Archbishop of Panama: "We have a corrupt society and no one takes the first step to transform it" 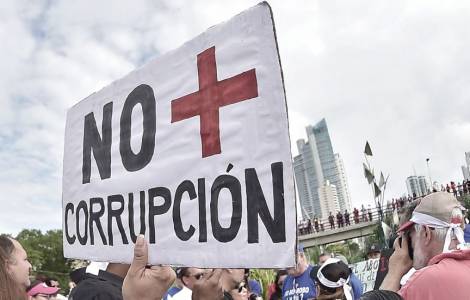 2020-11-26
National Dialogue seeks ways out of the crisis: Archbishop Ulloa calls on Christians to act consistently

2020-09-18
The Bishops: "Against the viruses that have condemned us to poverty and death, we have the antibodies of justice, charity and solidarity"

2020-08-04
Mgr. Ulloa on the pandemic: "sensitivity, unity, solidarity and generosity must prevail"

Panama City (Agenzia Fides) - The Archbishop of Panama, Mgr. José Domingo Ulloa, made an energetic appeal to Panamanians to tackle and resolve the "great problem" of corruption that afflicts the country and society, and that, he said, happens above all in knowing how to choose one's rulers. "Corruption is a real problem, and at the moment the big problem is that we have a corrupt society, this is the truth", Monsignor Ulloa told the press after presiding over the Eucharistic celebration last Sunday. "That is why I believe we are called to choose who represents us, so that no one complains", said the prelate. The appeal of the Panamanian Archbishop is part of a series of scandals linked to alleged acts of corruption, which came to light in the local media during the Covid-19 pandemic. Some of them have led to the dismissal of health officials due to conflict of interest. However, the phenomenon of corruption in Panama is not recent: a survey by the Spanish research company GAD3, conducted at the request of the Panamanian newspaper "La Prensa", published last May, found that 71.1% of those surveyed link the current government of Laurentino Cortizo to corruption, while 15.8% are indifferent. For years Panama has been shaken by corruption scandals, with a judicial response, in many cases, described in unison as impunity, and a social inequality that does not diminish despite the economic growth that has marked the country in the last decade. For Archbishop Ulloa this situation unfortunately "is nothing more than a reflection of what we sadly are as a society, a corrupt society, which then complains about some corrupt people, but where no one takes the first step to transform it". Last Tuesday, August 31, the President of Panama, Laurentino Cortizo, declared the fight against corruption in his government, which, he reiterated, promotes transparency in public management. "I will not tolerate any act of corruption. The related complaints have been filed in collaboration with the investigating authorities", said Cortizo, who took office in July 2019 for a five-year term. (CE) (Agenzia Fides, 3/9/2021)