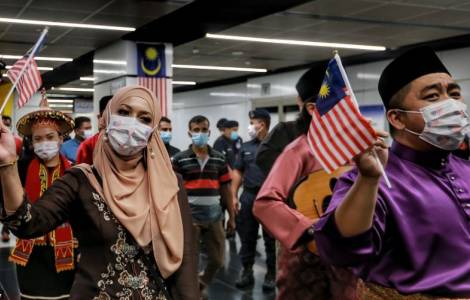 Kuala Lumpur, Malaysia (Agenzia Fides) - "Let us build a better future for Malaysia" is the motto of a message from the Catholic bishops on the occasion of Merdeka Day (August 31) and Malaysia Day (September 16). It is about two important dates in the history and civil life of the nation. The 64th "National Holiday" (Hari Merdeka or Merdeka Day) on August 31st commemorates Malaysia's declaration of independence, which took place on August 31, 1957; on September 16, the nation commemorates the creation of the Federation of Malaysia, which took place in 1963.
"We celebrate our nation by thanking God for the peace and harmony that we enjoy in many different ways, despite the challenges and obstacles that await us", said the three Bishops in a joint message, published on the occasion and sent to the Fides. The text is signed by Archbishop Julian Leow of Kuala Lumpur, by Mgr. Sebastian Francis, Bishop of Penang, and by Mgr. Bernard Paul Bishop of Malacca-Johore.
As in the previous year, the focus of the message is on the topic of the pandemic. Because of the pandemic, some religious celebrations or liturgies had to be suspended "while the dark shadows of the health, economic and political crisis weigh on the hearts of many Malaysians".
The pandemic, the Bishops note, has had an impact on the lives of Malaysians. It has hit the Malaysian economy as businesses are shutting down, incomes are low and job losses are affecting thousands of families. And these are just some of the immediate consequences on the lives of ordinary citizens. "Our lives have been impoverished in ways we could never have imagined: psychologically, emotionally and spiritually. Not only do we have to try to find balance during this time of desperation, but the reality of losing loved ones to the pandemic has made life even harder for many", write the
Bishops.
The political crisis that began in early 2020 has led to more instability in the country, as the government has changed twice since the 2014 parliamentary elections. "There is currently a general feeling of frustration and helplessness in the country. We hope that the newly appointed Prime Minister and his executive will lead us out of this triple crisis for the good of all", the message reads.
The Bishops appeal to the new Prime Minister, Ismail Sabri Yaakob, who was appointed last August 20th, to keep the promises he made to the nation in his inaugural address: to prioritize Malaysia's recovery on all fronts with integrity, responsibility and transparency, without fear or favor. "We expect the Prime Minister to encourage Malaysians to appreciate the richness and diversity of every culture, religion and race", said the Bishops.
The year 2021 will also mark the 51st anniversary of the "Rukun Negara" charter (the Charter of "National Principles", which was proclaimed in 1970 on the occasion of the proclamation of the National Holiday). This document forms the guideline for the life of the nation, which is based on the following principles: faith in God, loyalty to the king and fatherland, primacy of the constitution, rule of law, respect and morality.
The Bishops recall this charter with the following words: "Politics must be based on the principles of the Rukun Negara if we are to build a united, respectful, inclusive and sustainable society. We appeal to all politicians, the ruling and opposition parties of the country to put aside personal differences and ambitions and work together to help all Malaysians who are in serious need of support to rebuild our lives".
On behalf of the Catholic Church of Malaysia, the document thanks the people for the generosity, self-sacrifice and determination shown during the pandemic. In addition to the front line health workers in hospitals, it also reminds of the "silent heroes" such as security guards, cleaners, garbage collectors, house deliverers and many others who risk their lives to provide vital services to all citizens.
"Building a nation is not a matter for the elite or a few. It belongs to all citizens and we must all work to promote unity and harmony at the grassroots", said the bishops, who emphatically call for unity, common good and service to others.
In conclusion, the bishops warn of the political division in the country and emphasize that each of us has the opportunity to promote unity in our daily lives. "We must not allow a feeling of apathy, indifference to the concerns of others, to lead us to lose sight of our shared responsibility and duty as citizens. When we succumb to temptation of being isolated in our way of life, we only express selfishness and insensitivity", they say.
"Let us join forces to build, with God's help and under his guidance", concludes the appeal.
About 9.2% of the 30 million inhabitants of Malaysia are Christians (2010 census). Two thirds of the 2.6 million Christians live in East Malaysia, in the provinces of Sabah and Sarawak (on the large island of Borneo). (SD-PA) (Agenzia Fides, 31/8/2021)

AFRICA/CENTRAL AFRICA - Inauguration of a training center for nurses to be sent to rural areas, promoted by Cardinal Nzapalainga