ASIA/MYANMAR - Pandemic surge, but popular protest does not stop 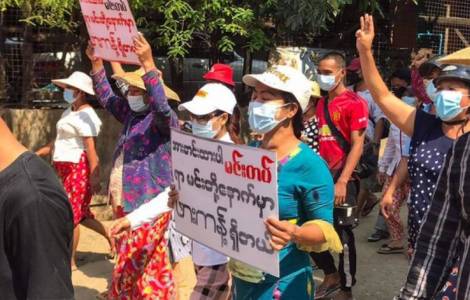 Hakha (Agenzia Fides) - Father Jerome Hlawn Khawl, Catholic priest and parish priest of the cathedral church of St. Joseph in the city of Hakha, capital of Chin State, in western Myanmar, is providing oxygen to families who need to treat people infected with Covid-19. As Fides learned, the pastoral Council of the parish has announced that anyone who needs oxygen for patients infected with Covid can request it and come and collect it. "This charitable donation - underlines the local Church - is publicly announced and granted without any discrimination of ethnicity, language, religion". Fr. David Khin Hmung, parish priest of Tiphul confirms to Fides: "We stretch our hands to the needy in times of need for the people of the diocese of Hakha, where the pandemic is spreading and we feel its serious effects", he says, recalling that in recent weeks over 60 Protestant pastors, 3 priests and 2 nuns have died due to the pandemic in the diocese of Hakha.
After the coup of February 1 and the consequent popular protest, due to the rainy season and the surge of the Covid-19 pandemic that puts a strain on the country, fighting has reduced in several areas of the nation (there is only intense fighting in central Myanmar). The pandemic is heavily infecting the army and the military are changing their strategy to protect soldiers, while the attention of public opinion and the energies of families and social and religious institutions are also absorbed by the fight against the pandemic. However, popular demonstrations continue and, according to Fides sources, over 60% of the Burmese population, of all ethnic groups, continues to closely follow the indications, statements and the path traced by the "National Unity Government", Nug, the shadow government made up of several Burmese deputies elected on November 8, but ousted from control of the military coup and have fled abroad.
"Citizens continue with the civil disobedience movement, do not pay taxes and boycott public services. Even businessmen do not participate in public contracts, the civilian population continues its resistance against the military junta", says a Fides source in Yangon. The NUG and the Burmese people, while continuing to strongly demand greater support from the international community, welcome new economic sanctions against the oil and gas sector, as requested by Thomas Andrews, Special Rapporteur on Human Rights in Myanmar, to the Council for the human rights of the UN. Speaking to the international community, Andrews explained: "I am talking about economic pressure, cutting the revenue the military junta needs to continue to hold power. I am talking about cutting access to weapons and technology". Andrews called for an "emergency coalition for the Burmese people", a group of States that would also effectively prevent the export of arms to the Burmese junta. In this phase of violence and suffering for the population, the United Nations has also asked to be able to provide humanitarian aid to civilians in Myanmar, agreeing to intervene with the Association of Southeast Asian Nations (ASEAN), of which Myanmar is a member. , "without the aid being exploited by the military". (PA-JZ) (Agenzia Fides, 9/7/2021)

ASIA/LEBANON - 11 Christians, 10 Muslims and 2 Druze (but only one woman) in the new government of Mikati