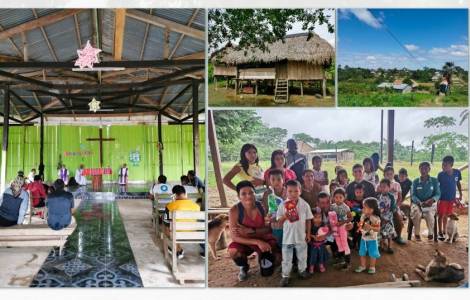 Puerto Leguizamo (Agenzia Fides) - In response to the request of the Synod of Bishops for the Amazon to "overcome borders" and create networks between neighboring Churches, the Apostolic Vicariates of Puerto Leguízamo-Solano, Colombia, and San José del Amazonas, Peru, have signed a decree in which they officially establish "a missionary station or pastoral center" to accompany the indigenous communities of both border territories. Mgr.Joaquín Humberto Pinzón Güiza I.M.C., Bishop in charge of the Apostolic Vicariate of Puerto Leguízamo-Solano, during an interview with the Communications Department of the Episcopal Conference of Colombia, explained what this initiative that the two neighboring Churches are undertaking consists of. The Bishop explained that the Church wishes to follow the paths suggested by the Synod of Bishops, which invite the creation of new ecclesial structures that allow them to better respond to the reality of these indigenous territories beyond the border barriers.
"We share the territory with San José de Amazonas in Peru, where many indigenous communities are scattered along the Putumayo River, on the border of Colombia and Peru. We wondered how to reach these communities with a more constant and closer presence.
That is why we have thought about how to unite as a local Church and create a missionary team that responds to the reality of the territory, going beyond national borders", explained the prelate in the interview. In this context, these two sister Churches have taken the initiative to found the missionary station, animated by an inter-vicarial team, which will be in charge of pastoral action in these territories. The team will have the task of maintaining an updated analysis of the reality of the communities and their territories and, in accordance with the pastoral guidelines suggested by the two Apostolic Vicariates, responding to the needs and challenges of these indigenous peoples. In the note sent to Fides by the Colombian Episcopal Conference, we read that in these territories there is a lack of state assistance for the basic needs of the communities, and the reality is marked by poverty and violence. In addition, "there are various groups that work in drug trafficking. All these problems generate violence and the displacement of communities", underlined Mgr. Pinzón Güiza. Through the new pastoral center, the Church intends to work on three specific objectives: 1. To be present. The Church wishes to accompany the communities to strengthen the processes that take place there. 2. Be creators of hope. In the midst of a gloomy landscape, where there are no broad paths, we want to bring feelings of hope. 3. Show the cultural richness of the Amazonian communities and promote it. "Both Vicariates have signed a decree establishing the formation of this new pastoral center or missionary station, which in turn will be under the responsibility of a team that has been set up, in order to promote the pastoral and territorial care of both sides", concluded the Apostolic Vicar.
On the Colombian side, the Apostolic Vicariate of Puerto Leguízamo-Solano, located in the ecclesiastical province of Villavicencio, has a territory of 56,000 Km2 and a population of 58,600 inhabitants with 48,638 Catholics grouped in 7 parishes. On the Peruvian side, the Apostolic Vicariate of San José del Amazonas, led by Mgr. José Javier Travieso Martin, CMF, is located in the province of Maynas, has a territory of 150,247 km2 and a population of 201,350 inhabitants, of whom 147,200 Catholics, and 11 parishes. The border between Colombia and Peru is 1,626 kilometers long. Musch of it is marked by the Putumayo River. This area is very difficult to reach as it is located in the middle of the Amazon rainforest. (CE) (Agenzia Fides, 1/7/2021)

ASIA/IRAQ - Patriarch Sako: the synodal journey initiated by Pope Francis should treasure the experience of the Eastern Churches