EUROPE/SPAIN - The generosity of the Spanish for the missions, in a year marked by the difficulties of the pandemic 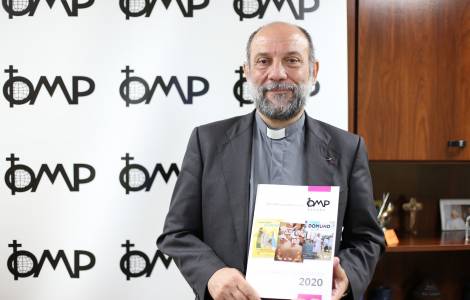 2022-02-09
"Proclaiming Christ in Europe": meeting of the European Directors of the Pontifical Mission Societies

2022-01-13
Missionary Childhood Day: The Church has been a pioneer in the field of child protection for many years

2021-12-18
The "Star Sowers": the announcement of Christmas made by the little ones and the "gratitude" of the missionaries

Madrid (Agenzia Fides) - At the end of the financial year, the National Direction of the Pontifical Mission Societies (PMS) of Spain presented the "Activity Report 2020", which reports what the PMS have done in Spain in a year marked by the Covid-19 pandemic, which has also transformed the ways of promoting the missionary spirit. Thanks to the generosity of the Spanish, the PMS were able to send 13,677,596 euros last year to support the 1,116 ecclesiastical circumscriptions entrusted to the Missionary Dicastery. The Presentation of the Report on the activities of the Pontifical Mission Societies of Spain in the year 2020 took place virtually yesterday, June 22. The event was attended by the National Director of the PMS of Spain, Fr José María Calderón; the President of the PMS, His Exc. Mgr. Giampietro Dal Toso; the volunteer of the diocesan delegation of Misiones de Córdoba, Mrs. Consolación Rodríguez. Fr José Maria Calderón stressed that "45% of the world's population lives in mission territories, and 44% of the works of the Church are found in those territories". He also commented on "the growing commitment in the formation of young people who carry out missionary work for a short period", and reiterated that "the PMS are not an NGO, they are part of the Church, and thanks to what has been collected, the diocesan Churches are supported in the world". After Fr. Calderón's speech, Archbishop Giampietro Dal Toso expressed his gratitude for the work done. I want to thank Spain for the great contribution that Spain has made to the universal solidarity fund of the Holy See, despite the pandemic that has affected us greatly. I address a special thanks to the Catholics of Spain, underlining their long missionary tradition", that the Church is missionary by nature, and the PMS are a very concrete tool that Catholics have to express their missionary faith, through participation, offering or financial contribution. Mission is something that touches the life of every Christian, regardless of the situation and the country in which they live, and in which everyone can participate as a sign of co-responsibility, concluded the President of the PMS. If the generosity of the Spanish allowed the PMS to send 13,677,596 euros in 2020 to support the mission territories, the most important contribution is made up of the 10,629 registered Spanish missionaries, with 7,180 in activity. Women constitute the majority of missionaries with the percentage of 54%. 68.03% carry out their mission in America. Bishops, priests and religious stand out in the profile of active missionaries, although there is no shortage of laity. As for the country with the highest number of Spanish missionaries, it is always Peru with 673. In a year marked by Covid-19, the PMS of Spain have stepped up their efforts to help communities affected by the virus through participation in the Covid-19 Emergency Fund, set up by Pope Francis. The PMS of Spain, through the # AhoraMásQueNunca campaign, contributed € 452,140.10. (CE) (Agenzia Fides, 23/6/2021)

VATICAN - The President of the Pontifical Mission Societies: to help rediscover the meaning of mission today