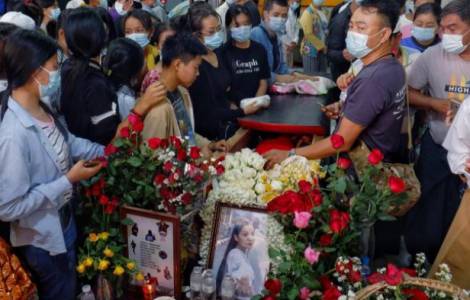 2021-04-07
Comfort to victims of violence and aid to the displaced: the mission of the Sisters of St. Joseph

2021-03-29
Franciscan appeal: "Now is the time for the international community to act in order to restore peace and democracy"

Yangon (Agenzia Fides) - "At this time of suffering and repression, we address a mournful appeal to Pope Francis: the Holy See must help us and get involved in mediation aimed at improving the situation of the people in Myanmar". This is what Joseph Kung Za Hmung, Catholic lay leader, Director of Gloria News Journal, the first Catholic Internet newspaper in the country, told Agenzia Fides. He believes that this call could also be shared by the leaders of the Catholic communities such as the Bishops, priests and religious who have often helped and assisted the demonstrators. He further remarks: "We still remember with joy and emotion the visit of Pope Francis to Myanmar, in November 2017. Then General Min Aung Hlaing, currently the head of the military junta, visited him at his residence, at the Archbishopric of Yangon. We came to know that the Holy Father had recalled and asked the general to be responsible for sustainable peace and democracy in Myanmar. Today, as we watch our young people die, we believe that mediating action by the Holy See could help us put an end to the violence and restore peace and reconciliation".
Joseph Kung Za Hmung reminds Fides that yesterday a 19-year-old young woman was killed in Mandalay. "Kyal Sin is our angel. She was a 19-year-old girl, from a Chinese family in Mandalay. She was shot dead by an army sniper while demonstrating peacefully. She is already considered a heroine and a martyr of freedom. I believe she will become a symbol for the many young people who crowd the streets and continue the protest. Before dying, she wrote a letter: "I am afraid, but we will never give up our fight". She was brave. At her funeral yesterday in Mandalay, there were over two thousand people, mostly young people, of all faiths". Joseph Kung Za Hmung remarks that "the civil disobedience movement continues in non-violence, despite the repression of the army. Young people organize sit-ins, and it is the army that advances to disperse them, even by shooting and killing people. It is a movement that comes from below, and that has no recognized leaders".
As Fides learned, the Sisters of St. Joseph of the Apparition present in Mandalay also took to the streets to help care for and take care of the demonstrators, who are often beaten and injured. "We are saddened by the death of innocent and defenseless young people. What moves us is compassion", remark the nuns. Since the beginning of the protest, the sisters have decided to visit the relatives of those killed to alleviate their suffering a little and give them comfort: "Our prayer is important to them, even if they are Buddhists. In this way we demonstrate our solidarity and we strengthen the human and spiritual bond".
Showing empathy and solidarity, the nuns watched and prayed after the death of 36-year-old Ko Min Min, who was killed in recent days in Mandalay, when the police opened fire on the crowd to disperse the protest and they then they cried and prayed with the family of another young victim, 16-year old Wai Yan Htun, who was also shot by a sniper.
The Burmese faithful remember and appreciate the words addressed by Pope Francis in the general audience on March 3: "Sad news of bloody clashes and loss of life continue to arrive from Myanmar. I would like to draw the attention of the authorities involved so that dialogue may prevail over repression and harmony over discord. I also appeal to the international community to ensure that the aspirations of the people of Myanmar are not stifled by violence. May the young people of that beloved land be granted the hope of a future where hatred and injustice make way for encounter and reconciliation. Finally, I repeat the wish I expressed a month ago: that the path towards democracy taken in recent years by Myanmar may be resumed through the concrete gesture of the release of the various political leaders imprisoned ".
Christians, who constitute some 6% of Myanmar's 54 million inhabitants, united with the demonstrators since the first days after the coup on 1 February, in a spirit of non-violence and peaceful resistance to injustice. (PA) (Agenzia Fides, 5/3/2021) 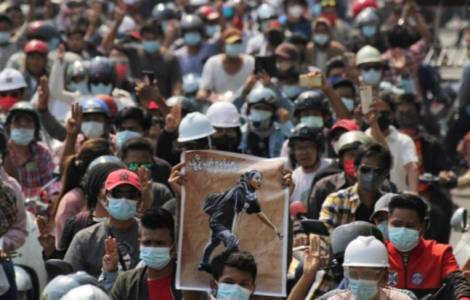 AMERICA/BOLIVIA - The Archbishop of Sucre: "We will have very difficult moments but we must move forward because we do not live to die, but to live"

AMERICA/CHILE - University pastoral care: "Resurrection in the pandemic for a new life"

AMERICA/VENEZUELA - The path of the second National Pastoral Assembly: "An outgoing missionary parish for the new times"

AMERICA/CHILE - University pastoral care: "Resurrection in the pandemic for a new life"

VATICAN - Pope Francis' gratitude for his trip to Iraq: "Muslims invite Christians to return, and rebuild churches and mosques together"

AMERICA/COLOMBIA - Historical memory for reconciliation and peace: project in the diocese of Valledupar

AMERICA/COLOMBIA - Historical memory for reconciliation and peace: project in the diocese of Valledupar

AMERICA/MEXICO - The mission of the politician: a vocation at the service of national reconciliation and the construction of the common good