AMERICA/ST VINCENT AND THE GRENADINES - First mission opened in Belle Vue: the work of the Redemptorists celebrates its first year 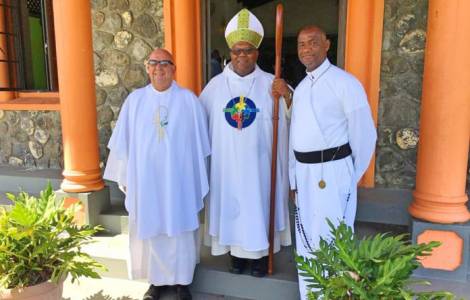 SAINT VINCENT AND THE GRENADINES

2020-09-29
First mission opened in Belle Vue: the work of the Redemptorists celebrates its first year

Kingstown (Agenzia Fides) - About a year ago, the Redemptorist missionaries accepted the task of opening a mission in the south of St. Vincent and the Grenadines (SVG), a nation in the southern part of the Caribbean, formed by the main island, St. Vincent, and from the Grenadine archipelago. At the request made by Msgr.Gerard County, CSSp., Bishop of the Diocese of Kingstown, on which these territories depend, Father Paul Borowski, Provincial Superior of the Redemptorists, and Father Kevin Murray, then Superior of the mission in Saint Lucia, visited the area of which they had to assume pastoral care.
The visit focused on the parish of San Benedetto, located in the northern part of the country. In its territory there are three other communities, each with a chapel, which depend on the parish: Georgetown, Belle Vue and Sandy Bay. The latter includes a large indigenous population, known as Garifuna. Sandy Bay is also home to the Garifuna Oven/Bakery, a local Church initiative that serves the population and provides jobs for residents.
The arrival of Father Kevin Murray, C.Ss.R., together with Brother Gerard St. Hilaire, C.Ss.R. on October 31, 2019, marked the beginning of the mission of the Redemptorists in the diocese of Kingstown. The two religious traveled on a fishing boat, left from Santa Lucia, where they had served until then. A faithful parishioner, Lambert Charlemagne, who manages the structures of the Church in Santa Lucia, travelled with them. Mgr. County and Father Collin Jackson welcomed them at the dock, with affection and warmth.
The first Sunday in the parish, November 3, 2019, was full of events. Parishioners from all communities were present in the church of Saint Joseph, in Belle Vue, for the festive mass. Mass was followed by a festive welcome with greetings from many people, including children with special needs from the Casa San Benedetto and the nursery school, managed by the Carmelite nuns within the parish.
An old kindergarten for children was set up as a residence for missionaries, and also welcomed Fathers Paul Borowski, C.Ss.R. and Ako Walker, C.Ss.R. as initial guests, who were also present for the official inauguration of the Redemptorist mission in SVG, on December 8, 2019. A small detail can make the situation understood: since the bed for Father Paul's room was not yet ready upon his arrival, the Provincial Superior slept on the floor, on a mattress.
In this year 2020, the mission carried out the usual activities (prayer, celebrations, preparation for the sacraments) to which was added the packaging of food parcels for parishioners in need, forced home by the pandemic. Now the Garifuna Oven/Bakery is also at the center of attention in view of its renovation and expansion. In fact, this work center has a long and faithful history serving the Sandy Bay area and beyond. (CE) (Agenzia Fides, 29/9/2020)

ASIA/SOUTH KOREA - President of the Bishops' Conference rejects amendment of the abortion law and calls for the right to conscientious objection: "Abortion is unacceptable"