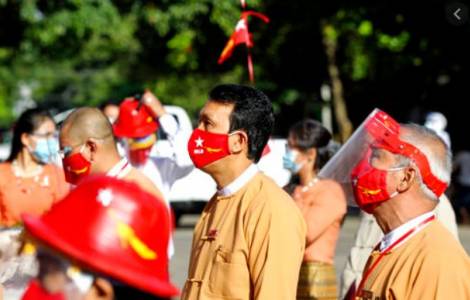 2020-10-27
Violence and tensions in Chin and Rakhine States: food emergency and elections at risk

Yangon (Agenzia Fides) - While there is an exponential increase in the cases of Covid-19 and the conflict on the north-western front of the country does not cease, the electoral campaign for the legislative elections of Myanmar has entered into full swing: it is the second time, after the 2015 vote, that the Country faces democratic consultations. According to analysts, Aung San Suu Kyi's League for Democracy (NLD) enjoys wide popularity, but many uncertainties remain. In Yangon, as in other cities of the Country, the color red, the symbol of the League, already predominates. The shadow of the pandemic, which the Country initially seemed to have escaped (with only 6 victims until August 16), weighs on the consultation on November 8: the toll, in mid-September, was already over 3,600 cases and 39 victims, with infections which tripled in just one month. Despite this, the Electoral Commission of the Union rejected requests (especially from the opposition) for a postponement of the vote, confirming the November date. The main outbreak of the pandemic is in the western State of Rakhine, an area of the Country that refers to another serious internal problem: war.
Rakhine and Chin, two buffer States respectively with Bangladesh and India, have for about two years now seen fighting with the Arakan Army, an autonomous armed group not recognized as an interlocutor in the national peace process (see Fides, 26/8). Rakhine is the land of the Muslim Rohingya minority, largely expelled from the Country between 2012 and 2017: those who remained live in refugee camps in poor sanitary conditions or in villages under the control of the army. Thousands of Rohingya, who fled to Bangladesh, have tried in recent months to return illegally to their homes, taking the virus with them alongside the enormous burden of pain. Intercepted, like others from abroad (India, Thailand, China where many Burmese work), some of them have been found positive, so much so that the government has again imposed a lockdown in Rakhine. For safety, the measures are extended everywhere and only the State of Kayah (where an important Catholic community lives) has bee saved, which continues to be the only area of the Country without infection.
The Rohingya affair also brings with it another problem: the representation in Parliament of Muslim citizens, a minority that in Myanmar (excluding the Rohingya) has about 4 million people. Suu Kyi's league, which in the past consultation had not nominated any, this time presents two: a step in the direction of greater openness towards those who are not part of the Buddhist majority. The problem also concerns other ethnic religious minorities as members of the Burmese Catholic Church had repeatedly highlighted.
We vote for the renewal of the Upper Chamber (House of Nationalities) and for the Lower Chamber (House of Representatives) of the Union Assembly, the Burmese bicameral Parliament. The Lower House is made up of 440 seats, of which 330 are elected and 110 are appointed by the Armed Forces. The Upper House is instead made up of 224 seats, of which 168 elected and 56 appointed by the military. The system, which the League tried to change without luck in the current legislature, therefore gives the army a quarter of the seats: this allows it to exercise a substantial right of veto on any constitutional change, which requires more than 75% of the votes to be approved. The military also runs the most important opposition party, the Union Solidarity and Development Party (USDP), led by former general Than Htay. The party promises a better future of democracy, human rights and consolidation of the peace process. But the USDP, the party that represents the military caste, must confront the accusations that the United Nations and major human rights organizations, such as "Amnesty International" and "Human Rights Watch", make against the Burmese army , holding it responsible for serious human rights violations. A lawsuit for violation of the Genocide Convention, brought by The Gambia, is pending before the International Court of Justice (ICJ) in The Hague. (MG-PA) (Agenzia Fides, 22/9/2020)

AFRICA/NIGER - Attack against soldiers on the border with Mali; according to a Bishop, the jihadists intend to occupy the Sahel region

ASIA/PHILIPPINES - The work of a missionary for street children in Manila, in times of pandemic