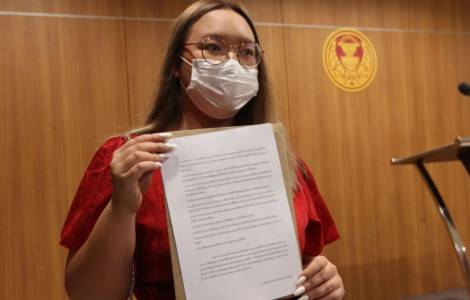 2020-12-23
Testimony of a missionary: "The sense of the common good of the Thai people: we are ashamed of contributing to the malaise of others"

2020-11-28
The protest of the "yellow ducks": democracy and fewer privileges to the Crown

Bangkok (Agenzia Fides) - The young people of Thailand give life to a new season of street demonstrations and freely express their aspirations for freedom and democracy. The new movement that animates Thai society calls itself "Free Youth" and is beginning to worry the authorities. In fact, the president of the Thai Student Union, Jutatip Sirikhan, 21, was arrested on 1 September by the police in Bangkok for participating in student demonstrations that have crossed the streets of the capital and several other cities several times in recent months. The latest, in particular, on August 16, saw the participation of at least 10 thousand young people gathered in the central square of Bangkok, where the Democracy Monument has become the symbol of the Movement. Jutatip was arrested for an event on July 18 and is being charged with "violation of the rules on physical distancing" but could also be charged with sedition.
With his arrest, 15 activists have been jailed, including the well-known student leader Parit “Penguin” Chiwarak, who immediately posted a message of solidarity to Jutatip on his Facebook page, one of the most used social networks by the movement. The students are demanding the resignation of Prime Minister Prayut, a general formerly at the head of the military junta and who, they denounce, "was appointed Premier thanks to an unfair political system". The Premier, the young people observe, governs only thanks to the fact that in February the "Future Forward Party", an opposition political group, was banned and outlawed. It was the only political organization - with a progressive tendency and led by a very popular young entrepreneur - which, according to observers, could have led a valid parliamentary opposition. Since then, the demonstrations for Prayut's resignation have intensified and so have popular requests to change the Constitution and the electoral system, which today provides for an upper House composed of selected and non-elected members, therefore capable of overturning the popular will.
But the students went further: after the disappearance of Wanchalearm Satsaksit, an activist in exile in Cambodia since 2014, was announced last July, protests resumed, despite the ban on gatherings and the "State of emergency" decreed because of Covid-19. The key event took place on 10 August when an activist read a "Manifesto in ten points" in the square in which, in addition to calling for Prayut's resignation and a new Constitution, the Movement also charged the monarchy, a traditionally indisputable institution in Thailand, a country that has the most severe penalties in the world for crimes of treason.
Shared by a square of at least 4 thousand students of all ages and religious beliefs - many Catholic students also participate in the protests - the "Free Youth" Manifesto asks, among other things: greater transparency on the system that punishes the king's critics; separation between the personal wealth of the monarch and that of the crown; the prohibition for the monarchy to intervene in politics. In front of the new youth and student ferment, the government has not reacted violently but, after the last impressive demonstration, arrests, complaints and summons to the police station have begun, in order to intimidate and weaken the movement. (MG-PA) (Agenzia Fides, 3/9/2020) 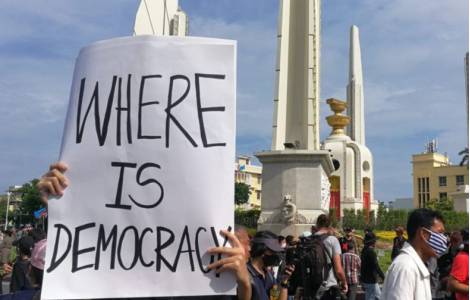 ASIA/INDIA - The analysis of a Jesuit:"A negative year for human rights in India"